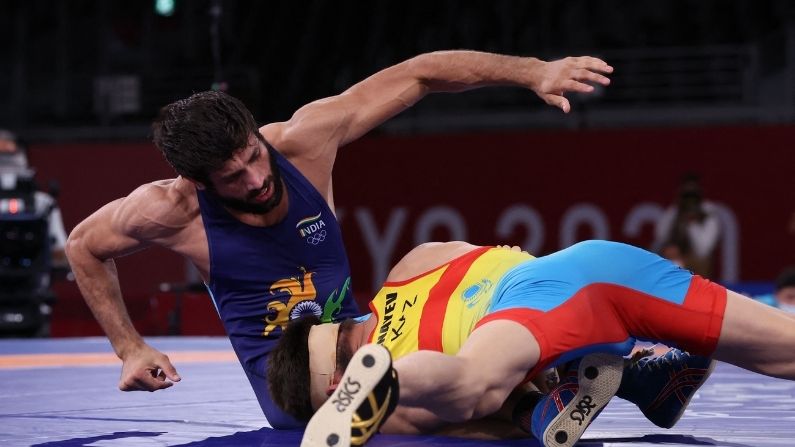 Ravi Dahiya has assured a medal for India in the Tokyo Olympics-2020 and with this he has joined the list of Sushil Kumar, Yogeshwar.

There were expectations from Indian wrestlers in the Tokyo Olympics-2020 and it has also started according to the expectations. Ravi Dahiya has ensured a medal for the country by making it to the finals of the 57 kg weight category. A medal was expected from Ravi Dahiya even before the start of the Olympics. Ravi has linked his name with Sushil Kumar and Yogeshwar Dutt by securing a medal in Tokyo. Ravi has a special bond with these two. Ravi learned the nuances of wrestling from the same academy from where Sushil and Yogeshwar had learned. That is, at Chhatrasal Stadium in Delhi. It was from here that Ravi’s journey of struggle started, which has reached the Olympic medal today.

Ravi had won the Tokyo Olympic ticket by winning the bronze medal in the 2019 World Championships played in Kazakhstan and from here Ravi had told that he can win a medal in the Olympics. Ravi comes from Nahari village of Sonipat city of Haryana and since the age of 10 he is learning wrestling under the guidance of Satpal Singh. The same Satpal Singh who made Sushil the master of this game. Nahari village is also called the school of wrestlers. Amit Dahiya, another wrestler who came out of this village also earned a lot of name.

When Ravi started playing, his family was not very well off financially. His father Rakesh Dahiya did not have land and used to cultivate on other’s land. He used to come to Delhi after traveling 40 km for his son, that too only to give him milk and fruits. This cycle lasted for almost a decade. Whatever help came from Chhatrasal Stadium was done. However, the struggle could not stop Ravi from moving forward. He started wrestling from his village, from where his journey progressed to Chhatrasal and today he is close to becoming an Olympic medalist.

When Ravi came to Chhatrasal Stadium, he had to live in a room with 20 people, but Ravi was different from the rest. He had a passion for doing something. In the Junior World Championships in 2015, he had told how much talent he has. He won a silver medal in this championship. In the midst of all the struggles, Ravi’s injury also troubled him a lot, that too in his early career. Ravi suffered a knee injury in the semi-finals of the Junior World Championships. It took a year for Ravi to recover from this injury and since then Ravi has never looked back. In 2018, he won a silver medal in the Under-23 World Championship. He finished fifth in the Senior Asian Championships but it was due to an ankle injury. He suffered an injury while playing against Kum Song Kang in the quarter-finals. Returning from here, Ravi made himself one of the best players in the country in the 57 kg weight category and also cut an Olympic ticket.