Tokyo Olympics 2020: Indian rifle shooters got only 20 minutes to practice, boxers had to prepare in the sports village 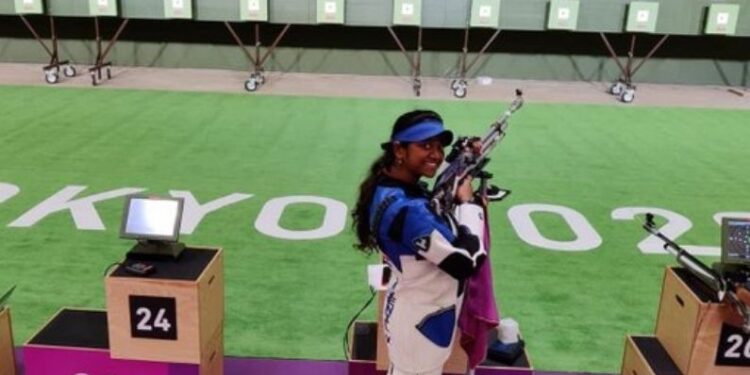 Indian shooters got very little time for practice on July 21, two days before the Tokyo Olympics 2020. At the same time, the boxing team practiced in the sports village itself.

“Dhoni is the strongest player mentally”, it is not for everyone to handle pressure like him

The players of the Indian Rifle Shooting Team got less time for practice on 21 July.

There are only two days left for the Tokyo Olympics 2020 to begin. Before this, the players are busy in practice to get used to the atmosphere and prepare for the tournament. But for the practice of India’s shooters and boxers, on July 21, some difficulties had to be faced. India’s 10m air rifle shooters got a chance to practice for only 20 minutes at the Asaka Shooting Range due to the time allotted for different teams. At the same time, due to the fact that the Olympic boxing venue is far away from the sports village, Indian boxers are practicing where they are staying. This is being done to avoid fatigue and the risk of COVID-19.

While rest of India’s shooters practiced for more than two hours, rifle shooters including Apurvi Chandela and Elavenil Valarivan got less than half an hour to practice. Apurvi and Elavenil have to participate in the competition on 24th July. The National Rifle Association of India (NRAI) told PTI on Wednesday, “Shooters from all the participating countries are practicing at the same place and hence the timings have been fixed for each team.” That’s why it happened. This morning’s practice session lasted for two to two and a half hours but the 10m Air Rifle team got only 20-30 minutes. The women’s 10m air rifle events will begin on Saturday while the men’s events in this category will begin the next day.

India’s eight shooters will not go to the opening ceremony

Deepak Kumar and Divyansh Singh Panwar will represent India in the men’s 10m rifle event. It has also been learned that the eight Indian shooters who are competing on the first two days will not participate in the opening ceremony of the Games on Friday. Apart from Apurvi and Elavenil, 10m air pistol shooters Saurabh Chaudhary and Abhishek Verma have events on the first day. Manu Bhaker, Yashaswini Singh Deswal, Deepak and Divyansh will target on the second day.

Boxing Arena is 20 km away from Khel Village

Here, Indian boxers have decided to practice at the facilities available in the sports village itself to avoid fatigue and the risk of COVID-19. The boxing events of the Games will take place at the Ryogoku Kokugikan Arena in Sumida Ward, which is primarily a sumo wrestling venue. The arena is located in Tokyo Bay, about 20 km from the sports village. Nine boxers of the country are participating in the Olympics this time. Boxing events will start from July 24.

A source in the Indian boxing contingent told PTI, “We have decided to practice in the sports village itself. We went to the Ryogoku Kokugikan Arena on Monday, but it’s too far. Rather, not only us but many other teams felt the same way and we are practicing all the games in the village itself. It is very hot here so traveling this far just for practice did not feel right. Along with this, the threat of COVID-19 also remains. Sports village practice facilities are good, there is no problem in it.

read this also: As soon as they reach Tokyo, the ‘India people’ are busy in preparations, do not want to leave any stone unturned for the Olympic medal