Tokyo Olympics 2020: Bhavani Devi chose fencing under compulsion, then made history by cutting Olympic ticket, will now attack in Tokyo 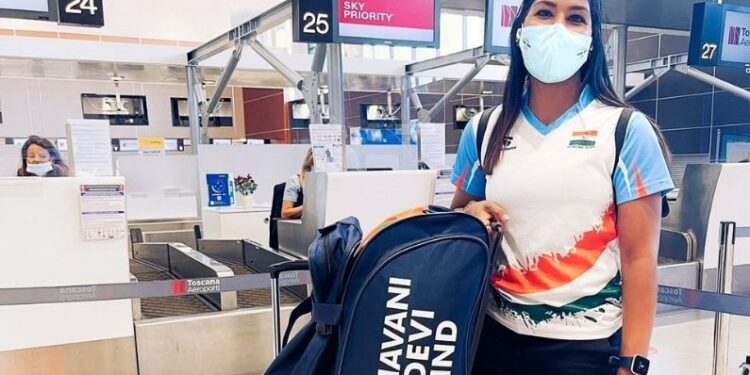 Bhavani Devi on Monday shared her picture from the airport in Italy and wrote that she is ready to fly for the Tokyo Olympics.

CA Bhavani Devi created history this year when she got the ticket for Tokyo Olympics-2020. She became India’s first swordsman to get an Olympic ticket and now she is ready to show her stamina for India in the Grand Kumbh of the Games. But this game was not his first choice, but he started this game under compulsion. Bhavani Devi had chosen this sport out of compulsion during her school days as she had no other option.

The 27-year-old from Chennai had been practicing for these games in Italy for some time after creating history, from where she left for Tokyo with a positive mindset. Bhavani told PTI, “I have practiced well. I am working hard and preparing well for my first Olympic Games. I attended a few camps with the Italian national team where some other international swordsmen were also present. I have practiced in France before this as well.

On Monday, Bhavani shared his picture from the airport in Italy and wrote that I am ready to fly for the Tokyo Olympics. He said that the competition in the Olympics will be very challenging. “The Olympics is a very special event and the most important for all athletes. So every match is going to be tough and anything is possible.

When asked about the impact on his sport due to the postponement of the Olympics due to the COVID-19 epidemic, he said, “Initially we had a lot of confusion about tournaments and Olympics. I understood the situation later and wanted to be fully prepared when the competitions start. That’s why I used to practice at home and on the terrace. We somehow managed to prepare during the lockdown and once I came back to Italy, I started my full training. ”

He said that training with Italian coach Nicola Janotti helped him improve his performance and rankings. He said, “My coach will also go to Tokyo. Practicing with him helped me improve my ranking and performance. We have consistently worked well together and the Olympic qualification is a result of that.”

He told that his mother CA Ramani will also be with him in Tokyo, which will encourage him. Ramani is named in India’s Fencing Squad and has been recognized as a P-TAP (Individual-Training Assistance Program). When asked about joining fencing, he said that at that time in school he had no other option. “The school had six sports options including fencing. By the time I was enrolled, all the places in other sports had been filled. I had no other option but to choose fencing. It was a game that not many people knew much about and I seriously decided to try my hand at it. I’m glad I did because I love it now.”