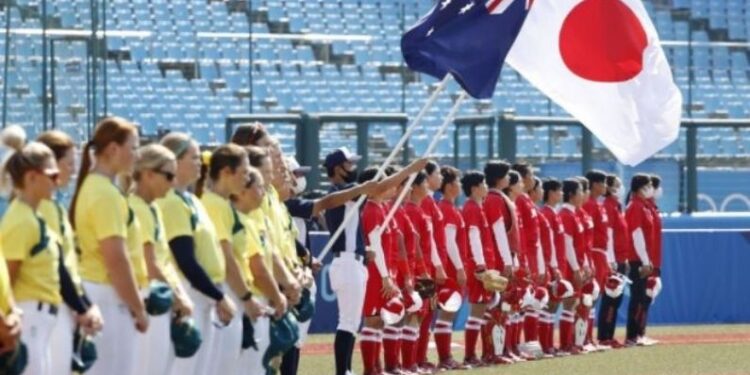 The Olympic Games are to be inaugurated on 23 July at the main Olympic Stadium in Tokyo, but before that, some events are starting from today.

The Tokyo Olympics 2020 began with a softball event in Fukushima. (Photo: Kyodo)

The wait for the Olympic Games is finally over as well as the era of speculation and apprehension. The Tokyo Olympics 2020 Games have started amid a year-long delay due to the Corona virus epidemic and constant cancellation pressure. The 32nd Olympic Games, being held in the capital of Japan, began on the morning of Wednesday 21 July with a women’s softball event, where the first match was between hosts Japan and Australia. With this, the sport returned to the Olympics for the first time since the 2008 Beijing Olympics. In 2008, Japan had won its gold medal and once again the Games were started in an attempt to show their dominance in this sport.

By the way, the formal start of the Olympics is to be from 23 July and everyone knows this. In such a situation, it must be a bit surprising to read this, but in every Olympics some games start before the opening ceremony. Tokyo 2020 is inaugurated on 23 July, but before that the softball event started in Fukushima. Apart from this, baseball and football matches will also start today. Baseball has also been included in the games of this time.

The 32nd Olympics started in the city of Fukushima, about 250 km from Tokyo, the main venue of the Olympic Games. This beginning in itself is special in many ways. This city was badly devastated in the tsunami 10 years ago and now these Olympic Games affected by the epidemic also started from this city, which also gave the message of return. In the games that started without spectators due to the fear of virus infection, hosts Japan defeated Australia 8-1 and started with a win.

The #TokyoOlympics are here.

On July 23, the opening ceremony will take place at the main Olympic Stadium in Tokyo, where teams from all countries will parade and the Games will formally begin. This time more than 11,000 athletes from 205 countries are participating in these games, which will run till August 8. Due to the threat of corona infection, a state of emergency has been imposed in the city, which will continue during the entire Games and the entire Olympics will be organized without spectators.