Tokyo Olympics 2020: Amit Panghal gets a bye in the first round, Mary Kom will face this boxer 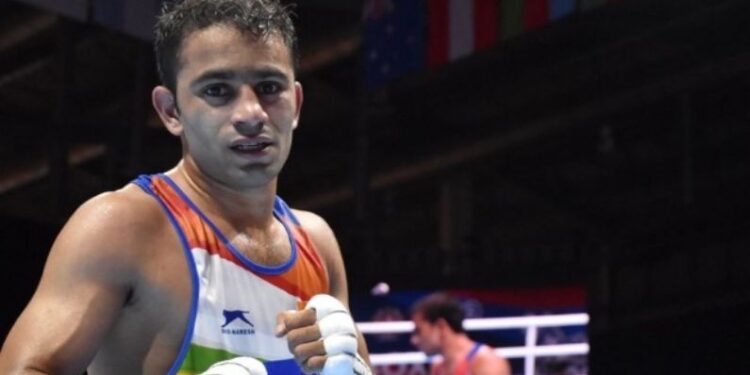 There are high hopes of medals from Indian boxers this time in the Tokyo Olympics-2020 Games to be held in the capital of Japan.

Amit Panghal got a bye in the first round at the Tokyo Olympics.

There is now one day left in the Tokyo Olympics-2020. These games will officially start from Friday. The medal hopes from India’s boxers include male boxer Amit Panghal and six-time world champion Mary Kom. It has been announced who will clash with whom in boxing. Amit Panghal, one of the country’s biggest medal hopefuls, got a bye in the first round. On the other hand, Mary Kom will face Dominica’s Miguelina Garcia.

Amit will compete in the men’s 52 kg. He is the top seed in this category and the number-1 boxer in the world. Mary Kom will enter the women’s 51 kg weight category. Their match will take place on July 25. Apart from Amit, three more boxers of India got a bye in the first round. These include male boxer Satish Kumar, female boxer Lovlina Borgehan, and Simranjit Kaur. Lovlina Borgehan (69kg), Simranjit Kaur (60kg) will compete while Satish Kumar (91kg) will compete

These boxers will enter the first round

Take a look, tell us what you think ⬇️#RingKeBaazigar#boxing#Tokyo2020#Cheer4India pic.twitter.com/KjCeYTHJ5V

These will be the rivals of those who get bye

Amit will go straight into the second round on July 31 where he will face Rajab Otukile Mohamed and Ybergen Martinez. Satish will face Ricardo Brown of Jamaica. Lovlina will take on Nadine Apetz of Germany. Simranjit will face a challenge from either Palacios Espinoza or Sudaporn Sissonde.

Tokyo Olympics 2020: Manu Bhaker will win a medal in the Grand Kumbh of the Games! Coach prepared masterplan in three months