This football team preparing for the Tokyo Olympics left the match in the middle, the player was treated racially! 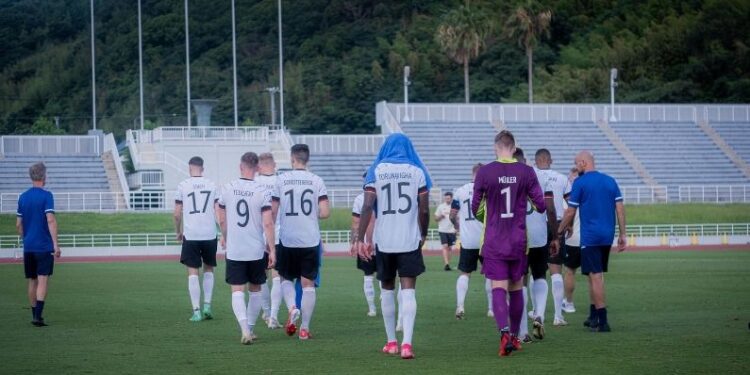 This team participating in the Tokyo Olympics was playing a practice match, but something happened in the match that the team left the field five minutes before the end of the match.

Now less than a week is left in the Tokyo Olympics-2020 and in such a situation everyone is busy preparing for the great Kumbh of the Games. Germany’s football team is also one of them. Germany’s team was playing a practice match with Honduras on Saturday to prepare for the Olympics, but something happened in this match that the team had to leave the field five minutes before the end of the match. Due to this the players and the coach of the team are very disappointed and they decided to stop the match at the same time.

In fact, when the German football team, which was carrying out its preparation in Wakayama, Japan, was playing a practice match and the score was tied at 1-1, then its player was allegedly racially remarked. This was not tolerated by Germany and decided to leave the field. The name of the player about whom this racial remark was made is Jordan Turunarigha, who plays in the team as a defender. This match is being played without spectators and the Honduras team has said that it was a misunderstanding.

The Germany national team also registered its protest through Twitter and informed about the incident. The team’s official Twitter tweeted, “The match was called off five minutes ago in a 1-1 draw. German players left the field because racist remarks were made against Jordan.

“When a racist comment was made against one of our players, there was no option to continue the game,” team coach Stephen Kuntz said.

ℹ️ The game has ended 5 minutes early with the score at 1-1. The Germany players left the pitch after Jordan Torunarigha was racially abused.#WirfuerD #Tokyo2020 pic.twitter.com/D85Q63Ynr9

not the first case

The incident of racial remarks in football is not the first. Recently, three black players of the England football team, which played in the final of Euro Cup-2021, had to face such remarks. The result of the match was a penalty in which these three players could not convert the penalty into a goal, after which the people of their own country made racial comments on social media about these three players. This case is not the first for Jordan. He had to face racial remarks while playing against Schalka in Hertha Berlin on 4 February 2020 in the German Cup. The fans of Shalka had made such comments against him, after which Shalka was also fined.

In the T20 World Cup, the role of these two big players will be important in the India-Pakistan match, Gautam Gambhir named