This cricketer got out in a strange way against Bangladesh, questions raised on the decision of the umpire, watch video 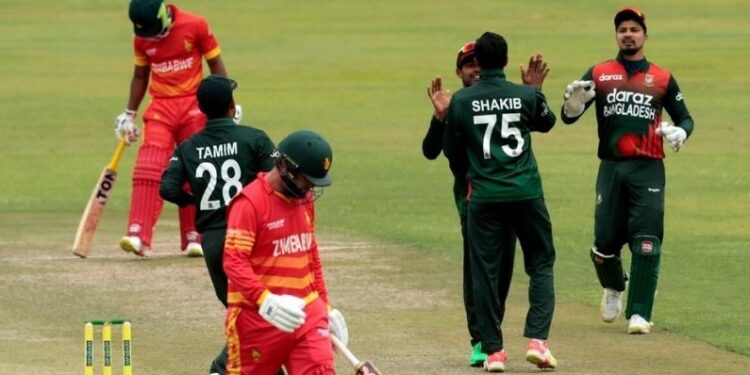 Zimbabwe had to face defeat in the match. Bangladesh won by three wickets thanks to Shakib Al Hasan’s unbeaten 96. With this, they took an unassailable 2-0 lead in the three-match series.

Zimbabwe captain Brendan Taylor was dismissed for a hit wicket in the second ODI against Bangladesh.

There was a strange case of getting out during the second ODI match between Zimbabwe and Bangladesh. Zimbabwe captain Brendan Taylor was declared hit wicket out. He was hitting the bat on the stumps after playing a shot. This incident happened in the 25th over of Zimbabwe’s innings. Brendan Taylor tried to put an upper cut on the ball of Bangladeshi fast bowler Shoriful Islam. But after passing the ball, Taylor again practiced that shot and during this time the bat was rotated backwards. During this his bat hit the stumps and the gilli fell down. After this, with the help of the third umpire, he was declared out. However, the Zimbabwe captain did not agree with this decision.

There was also a lot of controversy when Brendan Taylor was given out. In fact, at the time when he hit the stumps, the ball had become dead in a way, but the umpire agreed that the ball was not dead and that is why he was declared out. According to the Laws of Cricket, a batsman can be given a hit wicket out if he hits the stumps with the bat or anything else before or during his encounter with the ball. However, if the batsman has played the ball and the ball is dead, then he will be not out if he hits the stumps with the bat. The condition is that the batsman is not taking any runs during this period.

Taylor was left narrowly in the 9th over

During the second ODI against Bangladesh, Brendan Taylor narrowly escaped being hit once before. In the ninth over, he slipped while trying to defend a delivery from Taskin Ahmed. Due to this, his left shoe came off the foot and was saved from hitting the stumps with a slight margin.

At the same time, Zimbabwe had to face defeat in the match. Bangladesh won by three wickets thanks to Shakib Al Hasan’s unbeaten 96. With this, they took an unassailable 2-0 lead in the three-match series. Batting first Zimbabwe had scored 240 runs.

read this also: Even after Rishabh Pant recovers, the fate of two best friends will open in England, away from Team India!