This bowler did charisma by taking 3 wickets in 3 balls in the World Cup, a huge insult to the opposing team 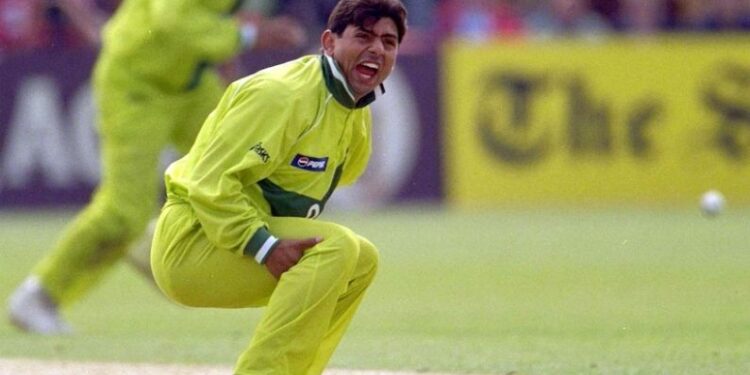 Taking a hat-trick in cricket is exactly Tees Maar Khan type work. Even if someone makes a hat-trick inside the World Cup, then what to say!

Saqlain Mushtaq is the second bowler to take a hat-trick in the World Cup.

Saqlain Mushtaq is counted among the magical spinners of the world. He was one of the most amazing spin bowlers of his time, in front of whom the biggest batsman seemed a novice. This Pakistani bowler has done many amazing things with his off-spin. One of these is taking a hat-trick in the World Cup. Saqlain Mushtaq is only the second bowler to dismiss three batsmen in three consecutive balls in the biggest tournament of cricket. He did this feat on this day i.e. on 11 June 1999 in the Super Six match against Zimbabwe. Thanks to his kind of bowling, Pakistan registered a tremendous victory of 148 runs. He is also the second bowler to take a hat-trick twice in ODI cricket. Before him, Wasim Akram had taken hat-trick twice in ODIs.

Saqlain Mushtaq completed his world hat-trick by dismissing Henry Olonga, Adam Huckel and Pomi Mbangwa. All these players were lower order batsmen and were basically bowlers. Saqlain took the wickets of all three in the first three balls of the 41st over of Zimbabwe’s innings. Out of these three wickets, if two were caught through the stumping, then one was LBW. First they hunted Olonga. Saqlain’s ball came out after hitting it and Olonga was out of the crease to play a shot on it. In such a situation, Moin Khan scattered the stumps. Olonga scored five runs. Then Adam Huckle came to the crease. Like his fellow batsman, he too got caught in the web of spin and got out of the crease. Moin Khan also scattered his stumps.

Now Saqlain was on a hat-trick. The batsman in front was Pomi Mbangwa. This time the hunt took place through turban. The ball was hitting the leg stump. Mbangwa tried to play the ball in the leg side instead of defending it but missed and the umpire agreed to the strong appeal of the Pakistani team. With this, history was made. Saqlain Mushtaq became the second bowler after Chetan Sharma to take a hat-trick in the World Cup. He bowled 6.3 overs in this match and took three wickets for 16 runs with a maiden. All these three wickets came in his seventh over.

what happened in the match

Pakistan captain Wasim Akram won the toss and elected to bat. Opener Saeed Anwar scored a century of 103 runs. Apart from him, no other Pakistani batsman could score more than 40 runs. Pakistan scored 271 runs for nine wickets in their game of 50 overs. Henry Olonga was the most successful bowler for Zimbabwe, taking two wickets. In response, Zimbabwe’s entire team was reduced to 123 runs ahead of three wickets each by Abdul Razzaq, Saqlain Mushtaq and two wickets each for Shoaib Akhtar and Azhar Mahmood. Only Neil Johnson could stand by his side. He played an innings of 54 runs. Pakistan’s team went to the final of this tournament. He was defeated by Australia in the title match.

read this also: WI vs SA: Dhoni’s sleuths removed the smoke of the batsmen, the history of West Indies was destroyed, then the new boy saved the shame