There was a storm in Johannesburg, bowlers were blown away, the game was played in 31 balls 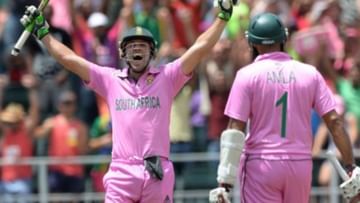 Corey Anderson held the record for scoring the fastest century in ODIs by completing a century in 36 balls against the West Indies in 2014, but AB de Villiers broke this record only a year later.

AB de Villiers holds the record for the fastest century in ODIs.

AB de Villiers, former captain of South Africa and counted among the great batsmen, made many records with his bat. This batsman was called 360 degree batsman. The reason for this was that this player used to hit shots in all the corners of the ground. De Villiers showed some similar shots and stormy batting on this day i.e. January 18 in 2015 and made a record that still stands. No one has reached near it yet.

set a flurry of records

Apart from de Villiers, Riley Russo played an inning of 128 runs in this match. In this innings, he faced 115 balls and hit two sixes apart from 11 fours. Hashim Amla was unbeaten after scoring 153 runs. He scored these runs in 142 balls with the help of 14 fours. South Africa had scored a huge score of 439 runs by losing two wickets on the basis of these innings.

In front of this huge score, the West Indies team had failed and had to face defeat by a huge margin of 148 runs. The West Indies team was piled on 291 runs after losing seven wickets in this match. For that, Dwayne Smith scored an inning of 64 runs in 65 balls and was the top scorer of the team. Apart from him, wicketkeeper Denesh Ramdin scored 57 runs in 55 balls with the help of four fours and a six. Marlon Samuels and Jonathan Carter scored an inning of 40-40 runs.