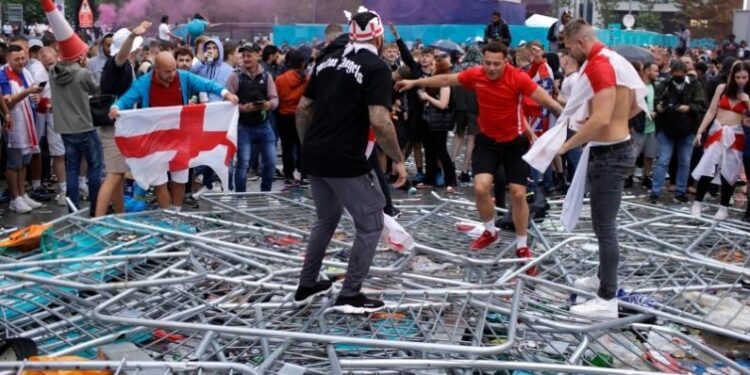 Before the final match between England and Italy at Wembley, London on July 11, many English fans tried to enter the stadium without tickets and created a ruckus in this affair.

Fans of England created a lot of ruckus outside Wembley Stadium before the Euro 2020 Final match. (Photo: PTI)

Sunday 11 July was a historic day for England Football Team. After a long wait of 55 years, an England football team played the final of an international tournament. He faced England in the final of UEFA Euro 2020 and this was also his biggest match at his home ground, Wembley in London. However, despite this, the final became a cause of shame for the England Football Association (FA) and its fans. Not because England lost the title to their own people in a penalty shootout in the final, but because off-field antics put football in this country to shame. The shoddy antics of several fans just before and after the finals dulled the belligerent performance of a brilliant team.

Before this final at Wembley, hundreds of fans created a ruckus and even violence in an attempt to enter the stadium without a ticket. Barricades were broken and clashes broke out with each other. Everyone had seen this on that day itself, but now a big disclosure related to it has come. England’s star defender Harry Maguire, who was battling for his team and country in the final that day, has revealed that his father and manager were also injured in the ruckus before the final.

Father injured in stampede outside stadium

Maguire, the centre-back who scored for England in the penalty shootout in the final, has told that his father suffered a rib injury during that incident, due to which he started having trouble breathing. Talking to the English newspaper ‘The Sun’, Maguire said, “I have seen many videos and talked to father and family. My father and agent suffered the most. Later he was finding it very difficult to breathe because of the ribs, he is not one of the more ruckus and hence moved on.”

Investigation on violence of fans and insult of national anthem

At the same time, after the team’s defeat, three black players of England had to face racial and hate remarks by the citizens of their own country, then there were reports of beatings of Italian fans by the English fans outside the stadium. And now in all these cases UEFA, the organizer of the tournament and the governing body of European football, has decided to investigate the violence related to the match. UEFA has asked an investigator to investigate the violence against England fans during the match.

Not only this, separate charges have been leveled against the England Football Association for many cases related to the uproar of the fans. The fans of the hosts were furious after England’s team lost in the final to Italy in a penalty shootout. In addition, UEFA also accused the Football Association of England of disrespecting Italy’s national anthem by its fans. Rather, a fan had stopped the game by running on the football pitch and during the match fireworks were also thrown while some things were also thrown. Earlier, the FA was fined 30,000 euros for insulting Denmark’s national anthem in the semi-finals.

Also read: UEFA Euro 2020: Italy dominates ‘Team of the Tournament’, Golden Boot winner Ronaldo did not get a place