The player whom Babar Azam had abused, now gave him a priceless gift, see VIDEO 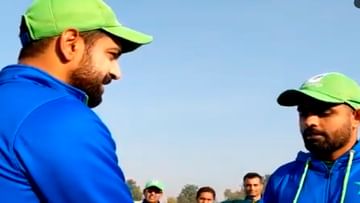 Pakistan gave debut to four players in Rawalpindi Test against England, 2 fast bowlers, one leg-spinner and one batsman got a chance.

Four players including Haris Rauf made their debut in Rawalpindi Test

In the first Test against England, Pakistan gave Test debut to four players. in Rawalpindi Pakistan Gave a chance to Saud Shakeel, Haris Rauf, Mohammad Ali and Zahid Mahmood in his playing XI. Please tell that Saud Shakeel is a batsman. Haris Rauf and Mohammad Ali are fast bowlers while Zahid Mahmood is a leg-spinner. All these players were rewarded for their amazing performance in first class cricket.

Among the debuts of these four players, the most special moment was Babar Azam giving Test cap to Haris Rauf. Babar Azam is often seen scolding Haris Rauf. Something similar was seen in the final of the T20 World Cup as well.

Let us tell you that in the Rawalpindi Test, England captain Ben Stokes won the toss and chose to bat first. His new opening pair gave England a wonderful start. Ben Duckett and Jack Crawley took England’s score past 100 in the 14th over itself. The rapid start of both made the Pakistani bowlers stand completely on the backfoot.

There were many hurdles in starting the Rawalpindi test as well. A day before the match, the health of 14 England players including Ben Stokes had deteriorated. The decision to start the match was also taken on Thursday morning. The good thing is that the match started on time.