The Pakistani bowler Dhoni sent CSK’s gift, Umran started getting challenges from him 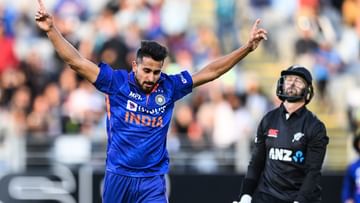 Pakistan veteran Aaqib Javed raised questions on Umran Malik and said that he is not as fit and trained as Haris Rauf.

Umran Malik has shown his speed in world cricket

India’s speed merchant Umran Malik has created a furore in world cricket. With his fast pace, he is instilling fear in the minds of more than one batsman. Malik, who has the power to bowl continuously at a speed of 150 or more, is now facing a challenge from the Pakistan bowler, who was sent a gift by MS Dhoni some time ago. Dhoni had sent his Chennai Super Kings jersey to Haris Rauf last year. Now Umran is facing a challenge from Rauf.

In fact, both Rauf and Umran are currently among those fast bowlers in the world, who are bowling consistently at a speed of 150 or more. Rauf did not directly challenge the Indian star, but Pakistani veteran Aaqib Javed has started a fight between the two.

Aqib even raised questions on Umran. He said that Umran Rauf is not as fit and his speed also decreases from 150 to 138 per hour. In an interview, Javed said that the comparison between the two bowlers is like comparing the rest of the batsmen with Virat Kohli. Aqib Javed said that Umran is not as trained and fit as Rauf. He bowls around 150 in his first spell, but in the 7th to 8th over, his speed comes up to 138. He further said that this comparison is like comparing Kohli with other batsmen.

Rauf is very disciplined about his training and diet. Javed said that he did not see any Pakistani bowler following the diet towards Rauf. It is important for him to bowl at a similar pace in the entire match more than the speed of 160 km. Rauf, who has taken a total of 102 wickets in 18 ODIs and 57 T20 matches, is a big fan of Dhoni. He met Dhoni in the 2021 T20 World Cup and asked him for his Chennai Super Kings jersey. Which has his autograph on it. After which Dhoni had fulfilled his wish.