The one who yearns for shoes yearned for victory, the team lost even after 2 centuries 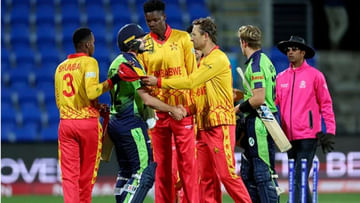 Ryan Burl played an amazing inning for Zimbabwe. He scored 59 runs in 41 balls. Before playing this winning innings, he also took 2 catches in the match.

The Ireland team is currently on a tour of Zimbabwe with the intention of playing the ODI series. The first ODI of the series has been played. You will still not be unaware of the result of the match held in Harare. Zimbabwe has defeated Ireland. Zimbabwe won the rain affected match by 3 wickets. But do you know who became his hero in this victory? Which player was that, who did not let the tussle of 2 centuries from Ireland stand in front of him. And, forced him to kneel. This is the same player who kept Ireland from winning, who never had shoes to wear. And, whose one tweet had created a stir. We are talking about Ryan Berl.

How did Ryan Burl come in the way of Ireland’s victory? They will tell, but before that just know the condition of the competition. In the match, Ireland came out to bat first and scored 288 runs for 4 wickets in 50 overs. Two batsmen scored centuries for Ireland, but even after this, they failed to register a win against Zimbabwe.

Team lost even after scoring 2 centuries

Captain Andy Balbirnie scored a century for Ireland. He scored the highest 121 runs, which included 13 fours and 3 sixes. Apart from this, Harry Tector also scored a century, who scored 101 runs in 109 balls, which included 8 fours and 1 six. Now the team which scores two centuries loses, this happens everyday in cricket. So it was one such day in the game of uncertainties, when Ireland lost after scoring 2 centuries.

Zimbabwe got a target of 214 runs in 37 overs due to rain becoming a hindrance, not 289 for victory, which they achieved very comfortably and took a 1-0 lead in the series. Ryan Burl played an amazing inning for Zimbabwe. He scored 59 runs in 41 balls. Before playing this match-winning innings, Burl had also caught 2 catches while fielding in the match. Looking at his all-round performance, Ryan was selected as the player of the match.

The headlines were collected by tweeting for shoes

Let us tell you that Ryan Burl made headlines in the year 2021 when he shared a photo on Twitter saying that he does not have any sponsor and he plays by sticking torn shoes. He appealed on social media that some company should sponsor his team to Zimbabwe. After this a big shoe company sponsored Zimbabwe.