The man who won the World Cup to Australia got slapped, his girlfriend beat him up 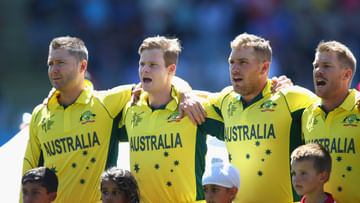 Michael Clarke came into the limelight when a video of him fighting with his girlfriend went viral. In this video, the captain who won the World Cup to Australia was seen being slapped.

Michael Clarke gets slapped by girlfriend

Tell me if it is one slap, two slaps or three slaps. There is a whole series of slaps here. That too while raining heavily. But there is even more interesting news, on which these slaps have been showered. This happened former captain of Australia Michael Clarke With, who are currently in headlines about it. Michael Clarke, who won the World Cup under his captaincy to Australia, came into the limelight when a video of his altercation with his girlfriend went viral. Apart from slapping Clark, the girlfriend also accused him of cheating in love.

Along with being slapped, there was also an allegation of cheating.

Pictures of Michael Clarke’s fight with his girlfriend, which were caught on camera, were also seen accusing him of cheating. In the video, Clarke can be heard saying that all the allegations against him are false. According to reports, this video is from when the former Australian captain was holidaying in Queensland and during this, apart from his girlfriend, his sister Jasmine and her husband Karl Stefanovic were also there.

There are reports that all four were having dinner with their friends when Australia’s world-winning captain was accused of cheating on his girlfriend. The Daily Telegraph has shared the video of the clash between Clarke and his girlfriend.

Michael Clarke, who won the ODI World Cup to Australia, first fell in love with model Lara Bingle. The relationship between these two started in the year 2007, and broke in 2010, when the picture of Lara Bingle taking a bath went viral on social media. This photo was taken by AFL star Brendan Fevola.

In 2012, Michael Clarke married Kylie Boldy, who was his schoolmate at Westfield Sports High in Sydney. In the year 2015, Clark also became the father of a child. But this marriage also did not work. Clarke and Kylie split in 2020. At the same time, it was rumored that Clarke had fallen in love with fashion designer and old friend Pip Edwards.