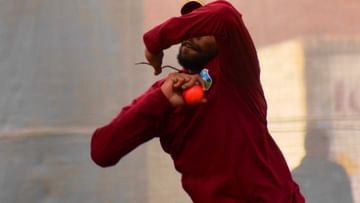 West Indies have added a player to themselves as an emergency fielder for the Adelaide Test, who last played a Test match 13 years ago.

The second match of the Test series between Australia and West Indies starts from today. This match is day-night and is being played in Adelaide. Australia is batting first after winning the toss in this match. After the toss, the captains of both the countries also stamped their respective teams. But, apart from the playing XI from the West Indies, the one player who was told to join the team was surprising. In fact, a player has been associated with West Indies as an emergency fielder for the Adelaide Test, who last played a Test match 13 years ago.

This Caribbean player named Omar Phillips has been linked to the dressing room of the team as an emergency fielder. This means that he is not a part of the playing eleven of the Windies team in the Adelaide Test. Means he will neither bat. No bowling. Only fielding will do, that too when the team needs it.

Please tell that Omar Phillips has been playing club cricket in Australia for the last 5 years. He has joined the team on the very first day of the Adelaide Test. Now the question is why the need was felt to add Omar Phillips to the team as an emergency fielder. So one of the reasons for this could be the injury of many players simultaneously.

Omar Phillips, the former Barbados and West Indies batsman, has been called up as an emergency fielder for the upcoming second Test match against Australia at the Adelaide Oval.

Philips is currently playing club cricket in Australia and will join the squad on Thursday. pic.twitter.com/tHG7Dc5HZZ

Kemar Roach, Jayden Seals, Kyle Miles, Broner all these players are injured. Did not even play in the Adelaide Test due to injury. In such a situation, in a hurry in Cricket West Indies, Omar Phillips present in Melbourne has been called to help the national team.

Omar Phillips, 36, made his Test debut in the year 2009 against Bangladesh. He also played his last test against this team. He played 57 first-class matches for Barbados but never represented the West Indies in any other format.