The batsman rolled while stealing the run, Root’s team thought of the runout as injured, then he started it! VIDEO 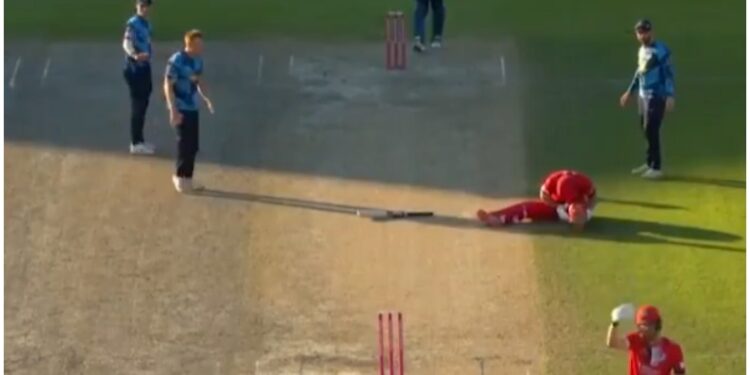 Something happened between the wickets which was good for the image of cricket. But defending the target proved to be equally bad for Root’s team.

The most accurate evidence of why cricket is called a gentleman’s game was seen in a T20 match played in England. Sportsmanship was at its peak in this match. However, instead the team showing sportsmanship had to face dire consequences. The incident is of the match played in the ongoing T20 Blast in England. The teams of Lancashire and Yorkshire were face to face. Joe Root was captaining Yorkshire in this match. Lancashire’s team was chasing the target, when something appeared between the wickets which was good for the image of cricket. But the team defending the target proved to be equally bad for Yorkshire.

Actually, during the match, two Lancashire batsmen Luke Wells and Steven Croft were batting at the crease. When Wells was on 27, he played a shot and ran for a single on it. Meanwhile, running from the non-striker’s end, Lancashire batsman Steven Croft stumbled and fell between the wickets. The muscles in his thighs got strained. He was moaning in pain. This run of Lancashire was not completed. The Yorkshire team could have dismissed him if they wanted. But this team of Joe Root set an example of sportsmanship by not doing so.

What would you have done?

Croft goes down injured mid run and @YorkshireCCC decide not to run him out#Blast21 pic.twitter.com/v1JHVGLn1T

The one who was left out from the runout, the one who teased him

However, Yorkshire’s team had to pay a big price for this sportsmanship in the match. He had to lose this match by 4 wickets. And, Steven Croft became a big reason for this. That is, the one who was left by Root’s company from the runout started the way for Lancashire’s victory. Croft scored 26 runs in the match remaining unbeaten till the end. At the same time, another batsman Luke Wells playing with him scored 30 runs.

Yorkshire had batted first in the match and their entire team was bundled out at 128 for 7 in 20 overs. In reply, the target of 129 runs was achieved by Lancashire at the end of 19 overs. He won this match 6 balls ago, which was celebrated a lot in the dressing room.

Also read: IND vs SL: Dhawan will carry out the special mission of Kohli-Shastri, will hit two targets with one arrow in Sri Lanka