The ball hit the stump, yet the batsman did not bowl, the team lost the match, the video would turn the head 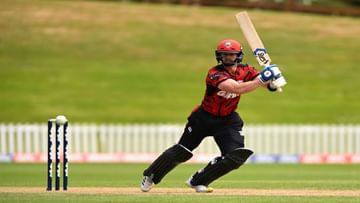 In the Super Smash 2023 tournament, Canterbury defeated Wellington in a thrilling fashion. Something was seen in the last over which turned everyone’s head.

Ball hits the stumps, yet the batsman is not bowled!

In the ongoing Super Smash tournament in New Zealand, something was seen on Monday which turned the heads of the fans. The match was between Canterbury and Wellington, this match went till the last over. In the last over, Canterbury beat Wellington a ball earlier. But something happened in this last 6 balls which is hard to believe. In fact, Nathan Smith, who was throwing the last over in this match, hit the stumps of the opposing batsman Cam Fletcher but he was not bowled. On the contrary, his team got four runs and his team also won the match.

Read further how all this happened, but first know the condition of this match. Batting first, Wellington scored 148 runs in the match. In response, Canterbury achieved this target by losing 5 wickets in 19.5 overs. However, this match went to Canterbury’s account only because of luck.

The ball hit the stumps but got four runs

Wellington fast bowler Nathan Smith had to save 9 runs in the last over. He gave only one run on the first two balls. Now Canterbury had to score 8 runs in the last four balls. Smith bowled the third ball as well. He bowled a yorker and Fletcher tried to scoop that ball. Fletcher could not scoop and the ball hit the leg stump. But the amazing thing is that despite the ball hitting the stumps, the bails did not fall. Not only this, this ball also crossed the boundary in the fine leg area. In this way, Canterbury got luck and won the last one ball first match.

Let us tell you that Wellington’s wicketkeeper Tom Blundell played the best innings in the match. This player scored 70 runs in 49 balls. Although his team lost the match. Cam Fletcher scored an unbeaten 55 for Wellington. Folks also played an inning of 32 runs. Let us tell you that with this victory, Canterbury’s team reached second place with four wins in 7 matches. At the same time, Wellington’s team is in fourth place with 14 points in 8 matches.

First day, first over and Pakistan’s senses blown away, Irfan’s hat-trick pulled out

Physio came 6 times in 66 minutes, match did not even run for a single session, the shortest test in history

Do you also use Google Pay, then you can deposit LIC premium like this

To further ease the premium payment process, LIC also offers its customers to pay their…