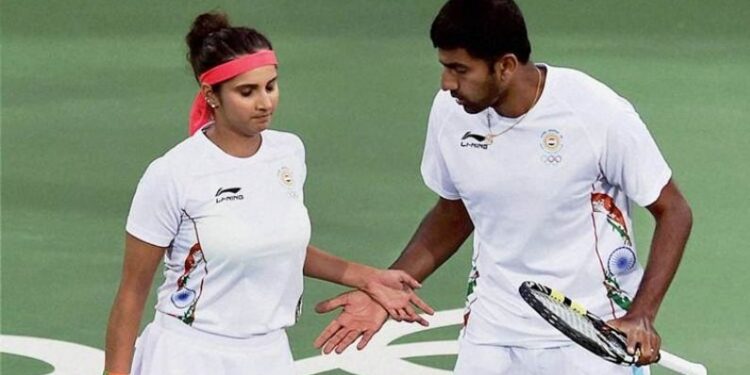 The All India Tennis Association on Monday condemned the “inappropriate and baseless” comments of Sania Mirza and Rohan Bopanna. Doubles tennis player Rohan Bopanna, after failing to make the cut for the Tokyo Olympics with Divij Sharan, tweeted accusing AITA of misleading everyone by pairing him with Sumit Nagal saying that the qualification There is a chance to get. Responding to Bopanna’s tweet, Sania also targeted AITA. AITA hit back at Bopanna, saying it only tried to help him as he had failed to qualify on his own. AITA had earlier announced the nominations of Bopanna and Sharan for the men’s doubles event at the Tokyo Games.

Bopanna (world ranking 38) and Sharan (world ranking 75) combined ranking at 113th failed to qualify. According to the International Tennis Federation (ITF), the pair were fifth in the list of substitutes a few days before the July 16 deadline. Nagal then qualified for the men’s singles. Due to the COVID-19 pandemic, doubles events in tennis are being given priority to those players who have qualified for singles in the Olympics. AITA then paired Bopanna with Nagal in the men’s doubles.

Bopanna tweeted, ‘ITF never accepted a pairing for Sumit Nagal and me. The ITF was clear that no changes were allowed without injury/illness after the enrollment deadline (June 22). AITA has misled the players, government, media and everyone else by saying that we still have a chance.

AITA asked why Bopanna did not qualify on his own

AITA general secretary Anil Dhupar said he had approached the ITF to change his nomination. Dhupar told PTI, ‘We had written to ITF that we want to change the nomination and now want to pair Bopanna with Nagal, so please advise us how to proceed. They replied to us that nominations can be changed only in case of injury and illness or any special circumstances. So where is the question of misleading anyone? What do we gain by doing this? The truth is that Bopanna’s ranking was not very good in terms of qualification. We just tried to help him so that he can compete in the games. Why didn’t he qualify on his own?’

Responding to Bopanna’s tweet, Sania Mirza said, ‘What??? If this is true then it is absolutely ridiculous and shameful. It also means that we missed a good chance of a medal in mixed doubles. If you and I had played according to plan, there could have been a chance. Both of us were told that the names of you and Sumit have been given. In mixed doubles, however, there was no question of a medal chance as Bopanna could not qualify for the men’s doubles.

In the Olympics, only those players who are already part of the singles or doubles draw can compete in mixed doubles. AITA issued a statement saying, “The Twitter comments of Rohan Bopanna and then Sania Mirza are inappropriate and misleading and it appears that they are not aware of the rules.” Bopanna could not qualify as per ITF rules. That’s why Sania Mirza’s tweet is also baseless and it is condemnable to get such a reaction from a player of her stature. We asked ITF if Sumit Nagal would be good enough to enter men’s doubles with Rohan Bopanna once he qualifies. ITF informed us that due to various reasons and rules, this cannot be done at this stage. Even if this happens, even then this pair will not be able to qualify.

“The pairing of Bopanna and Nagal would have been the third place (as per ITF) pair in the list of options,” AITA said. Tennis matches in the Olympics will start from July 24.