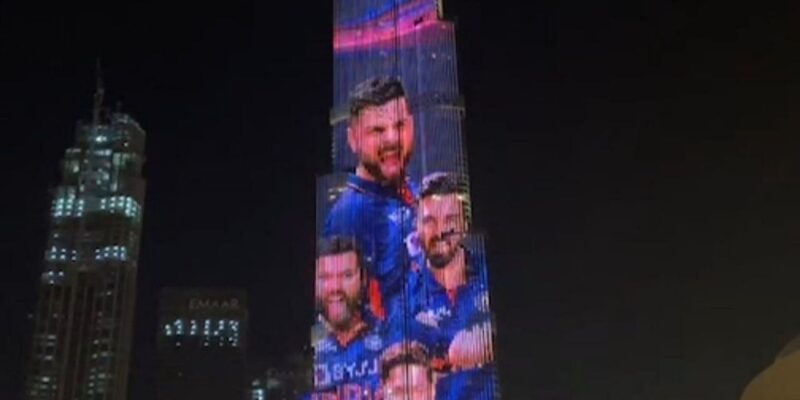 After being postponed for a year due to Coronavirus, finally the T20 World Cup is going to start from October 17. Hosts BCCI is organizing this tournament in UAE and Oman. Recently, he has launched his team India’s new jersey for this tournament. The pictures of this jersey were becoming quite viral on social media. On Thursday, the new jersey of this Team India was also shown on Burj Khalifa, which is considered to be the pride of Dubai.

BCCI shared a post on social media in which Team India’s jersey was launched. In this post, some players of Team India including Virat Kohli and Rohit Sharma were seen wearing the new jersey. The sponsor of this blue jersey is BYJUS. BCCI wrote in the caption of the tweet, ‘Introducing Billion Cheers Jersey. The pattern of this jersey is cheered by crores of fans of the team. Earlier, India had launched its new jersey on the tour of Australia. Then that look of Team India was influenced by the World Cup 1992. The Indian team’s jersey had a navy-blue retro color, which had blue, green, white and red stripes. But this time these stripes have been removed.

This jersey launch of India became even more bang. The launch of Team India’s new jersey was displayed at Burj Khalifa, the world’s tallest building in Dubai. The Board of Control for Cricket in India has shared the video of this special moment on the tweet. In the video, Virat Kohli, Rohit Sharma and some other players were seen wearing new jerseys on Burj Khalifa. Only a few special things are displayed in this way on Burj Khalifa.

The patterns on the jersey are inspired by the billion cheers of the fans.

India will launch the campaign on October 24

In the tournament, the Indian team will start their campaign in the tournament with a match against arch-rivals Pakistan on October 24 in Dubai. India’s next match will be against New Zealand in Dubai on 31 October, after that the team has to play against Afghanistan in Abu Dhabi on 3 November. India will win the remaining two matches of the Super 12 match as the winner of Group B (5 November in Dubai). And to play against the second place team from Group A (November 8 in Dubai).

Aryan Khan Case: NCB remembered Mahatma Gandhi in the hearing of drugs case, know what were the arguments of the lawyer