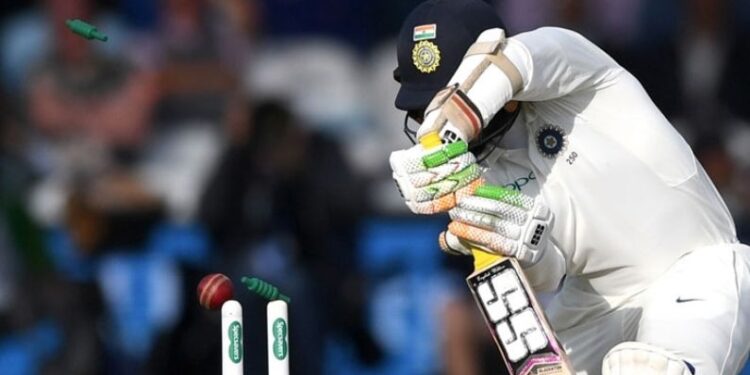 The Indian cricket team once looked in a strong position, thanks to the stellar performance of the top order, but after that the batting collapsed like a deck of cards.

India’s performance in England has always been a matter of concern. (signal picture)

Indian cricket teams have just gone to play on England tour. In these, the women’s cricket team has played its test while the men’s team will start the test series in the month of August. The tour of England remains very difficult for the Indian men’s team. Due to the conditions and weather there, matches have slipped from his hands many times. This time Team India, which went on the tour of England, does not have practice matches with any county team. But the tour of the Indian team that went to England earlier was long and they used to play many matches in England. Something similar happened during the 1996 tour. On this tour, Team India toured England under the captaincy of Mohammad Azharuddin. Under this, he had a match with Hampshire from June 29. In this match, on this day i.e. July 1, a bowler from Hampshire blew up the Indian batting order. The name of this bowler is Kevin James and he took four wickets in four consecutive balls. This is the only incident of taking four consecutive wickets in first class cricket.

India vs Hampshire match was played in Southampton. When Mohammad Azharuddin did not play in this match, Sachin Tendulkar captained the team. Hampshire captain John Stephenson won the toss and elected to bowl. Ajay Jadeja and Vikram Rathor gave India a great start. Both added 192 runs for the first wicket. However, both missed out on a century. Jadeja scored 91 runs while Rathore scored 95 runs. What happened after India’s second wicket fell was shocking. Kevin James took the first wicket. After some time, he also took the second wicket. This wicket fell on the score of 207 runs. After this, James also dismissed Sachin Tendulkar, Rahul Dravid and Sanjay Manjrekar on the same score. All these stalwarts were dismissed in successive balls and India’s score went from 207 for one to 207 for five.

Kevin James stunned the Indian batsmen with his left arm medium pace. At such a time, Sourav Ganguly and Anil Kumble became the saviors of Team India. Both shared an unbroken partnership of 155 runs for the sixth wicket. Kumble remained unbeaten on 59, while Ganguly remained unbeaten on 100. After this, India declared the innings with 362 runs for five wickets. Only Kevin James got all the five wickets of the Indian innings. He dismissed five batsmen for 74 runs. Then in batting also he showed Jauhar. He came to bat at number four and went after playing an innings of 103 runs. He, along with Jason Lenny (100), added 175 runs for the third wicket and took the team out of a difficult score of 45 runs for two wickets.

James could not play for England

Hampshire declared his first innings at 458 for nine. His last two batsmen Martin Thursfield (37) and Stuart Milburn (54) also gave India a nosedive. Both added 91 not out for the last wicket. This match was a draw. Salil Ankola took the highest four wickets in bowling for India. At the same time, Kevin James played 225 first class matches in his career and scored 8526 runs with 395 wickets. But he never played for England.

read this also: This Indian cricketer became a bowler from wicketkeeper and opener, yet within 4 months he was out of Team India