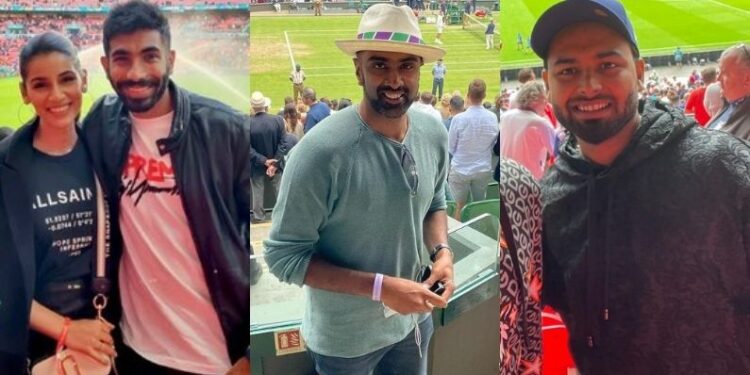 Indian players were given 20 days leave before the Test series, during which they were spending time with their families at different places while staying in the UK.

Some players of the Indian team went to see the matches of Euro 2020, while some also went to Wimbledon. (Photo: Twitter)

The news of a member of the Indian cricket team present on the England tour being caught by the coronavirus infection has created a stir. A few days ago, there was a case of 7 people getting infected in the England Cricket Team and now the news of the Indian player getting infected has raised questions. There is concern about the increase in corona cases in England, but the bigger question is whether the Indian players ignored the guidelines of the BCCI? This question is being asked because a report has claimed that recently, BCCI secretary Jay Shah had written an email to the team in view of the Corona cases in the United Kingdom, in which to stay away from crowded areas. told to.

According to the report of news agency PTI, Jay Shah in his email had alerted the players and team management members especially about events like UEFA Euro 2020 and Wimbledon. Shah had written that Indian players should avoid going to these big tournaments. The matches of both these tournaments were played in England last week, in which some other players including Indian team coach Ravi Shastri also made their presence felt.

From Euro to Wimbledon, Indian stalwarts were seen everywhere

Apart from some group matches of Euro 2020 in England, semi-finals and final matches were played in which huge crowd gathered. Team India’s wicketkeeper Rishabh Pant, fast bowler Jasprit Bumrah and his TV anchor wife Sanjana Gasheshan and batsman Hanuma Vihari went to Wembley Stadium to watch Euro matches on different occasions. At the same time, coach Ravi Shastri had reached the final match of Wimbledon 2021 on Sunday, July 11. Before him, spinner Ravichandran Ashwin had also come to see the Wimbledon match.

However, it is not clear when Jay Shah wrote this email and whether the team members ignored his advice or not. It is also not clear at the moment whether the infected player was a part of any of these events. No information has been given by the board in this matter.

The Indian contingent was on a 20-day leave since last month’s ICC World Test Championship final, which ended on Wednesday, January 14. Meanwhile, an Indian player has come under the grip of infection. All the members who went on the UK tour have kept silence about the name of the player. It is understood that the player is infected with the delta variant of Corona, due to which the cases of infection are increasing in Britain. This player is currently in isolation and will not go to Durham with the team yet. The Indian team will travel to Durham on Thursday, 15 July, where it will play a warm-up match for the Test series.