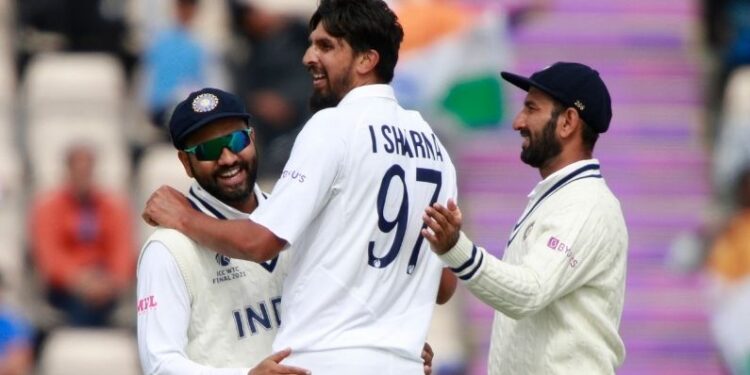 In this crucial Test against England, the swashbuckling batsmen Virat Kohli and Cheteshwar Pujara could not live up to the expectations.

Ishant Sharma was adjudged man of the match.

The Indian cricket team ended the long wait of 28 years against England. The team won its first Test since 1986 at the Lord’s Ground. This was also his first Test victory on foreign soil in three years. While Ajinkya Rahane, Cheteshwar Pujara, Murali Vijay, Ravindra Jadeja and Bhuvneshwar Kumar became the hero of this victory, while in bowling, Bhuvneshwar and Ishant Sharma played an important role in the team’s historic victory. This match between India and England (India vs England) reached its conclusion today i.e. on 21st July. In this match played in the year 2014, where Rahane scored a century, Ishant took 7 wickets. England got the target of 319 runs, in response to which the entire team was bundled out for 223 runs.

In this match, which lasted from 17 to 21 July, England captain Alastair Cook won the toss and decided to bowl first. The Indian team was all out for 295 runs in the first innings. In this, middle-order batsman Ajinkya Rahane scored a century of 103 runs. In his innings of 154 balls, he hit 15 fours and a six. The second highest scorer was Bhuvneshwar Kumar, who scored 36 runs. Cheteshwar Pujara scored 28, Virat Kohli made 25 and Murali Vijay scored 24 runs. Shikhar Dhawan, Captain Mahendra Singh Dhoni and Ravindra Jadeja failed completely. For England, James Anderson took four wickets while Stuart Broad and Ben Stokes took two wickets each. After this, England took a slight lead by scoring 319 runs in the first innings. The number three batsman Gary Balance scored 110 runs for the team. Apart from him, Liam Plunkett scored 55 not out and Moeen Ali scored 32 runs. For India, Bhuvneshwar Kumar, showing the example of swing bowling, put six wickets in his account. Two wickets came in Jadeja’s part.

Ishant broke England’s back in the second innings

After this, Team India started the second innings and this time managed to reach the figure of 342 runs. Opener Murali Vijay scored 95 runs. At the same time, Ravindra Jadeja played an innings of 68 runs in 57 balls. Bhuvneshwar Kumar scored 52 runs this time. Apart from them, 43 runs came from Cheteshwar Pujara’s bat, while Shikhar Dhawan contributed 31 runs. Virat Kohli was bowled on the very first ball by Plunkett. Ben Stokes and Liam Plunkett took three wickets each for England and Moeen Ali took two wickets. In this way England got the target of 319 runs to win. But his entire team could score only 223 runs and Team India won this match by 95 runs. Ishant Sharma became the hero of Team India in the second innings of England. He took seven wickets for 74 runs in the bowling of 23 overs. Mohammad Shami got 1 wicket and Ravindra Jadeja got the same wicket. Ishant got the man of the match award.