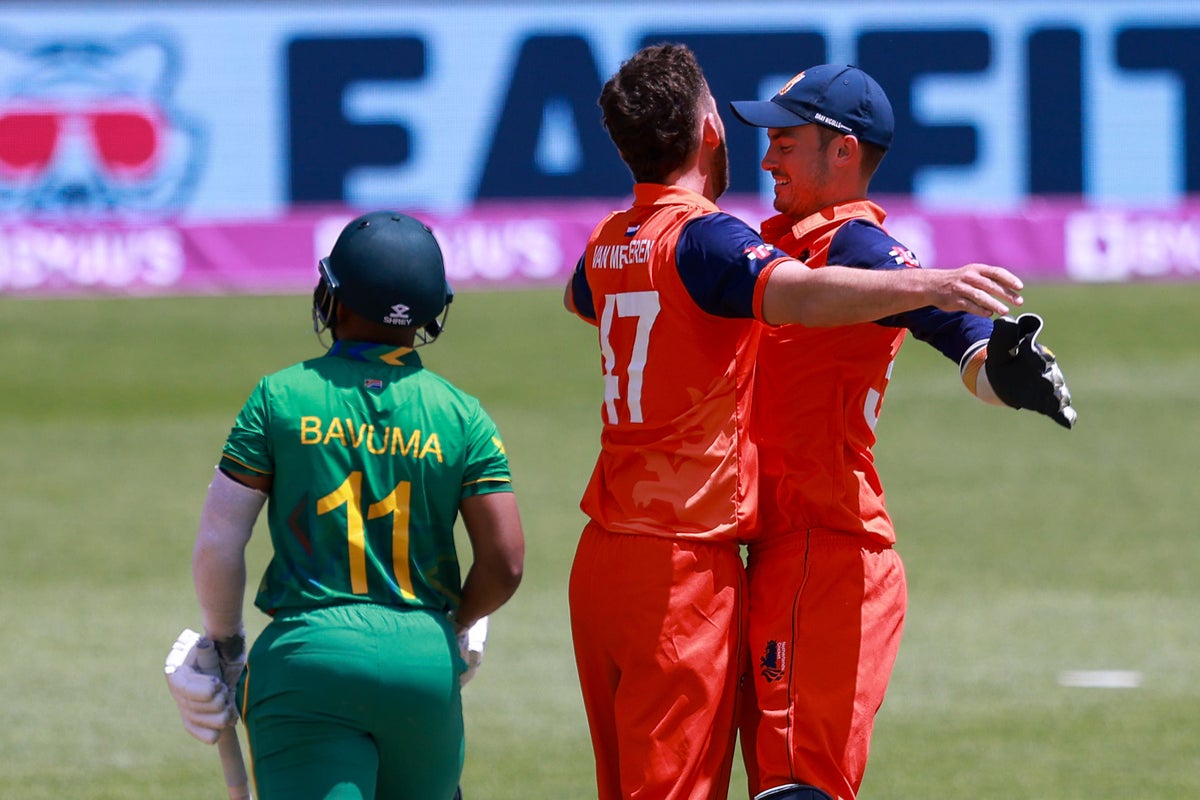 South Africa tumbled out of the T20 World Cup after a shock 13-run defeat to the Netherlands which piles the stress on Proteas captain Temba Bavuma.

A win would have been sufficient for South Africa to assert a minimum of a top-two spot of their Super 12s group however they by no means actually bought going of their pursuit of 159 on a sluggish pitch at Adelaide.

The Netherlands, the bottom ranked staff to succeed in this stage, pulling off a well-known win means whoever prevails between Pakistan and Bangladesh will undergo to the semi-finals alongside India.

Bavuma, who has amassed simply 70 runs in 5 innings with a strike-rate of 112.9 throughout his time in Australia, admitted he’ll seemingly take into account his place as white-ball skipper within the subsequent few weeks.

“It’s been a tricky time,” he mentioned. “To be considering that now, a lot of it will be emotional in terms of my role as the captain of the team but it’s something that I probably will think about.

“It would be emotional now if I thought about all of that. Whatever happens, I carry myself with dignity through all the good and bad times. If I were to leave, I would leave with my pride in tact.”

The Netherlands amassed 158 for 4 after being requested to bat first, with Tom Cooper’s quickfire 35 off 19 balls adopted by Colin Ackermann’s unbeaten 41 off 26 deliveries.

While all of South Africa’s top-six reached double figures, Rilee Rossouw top-scored with simply 25 off 19 balls and so they reached 145 for eight to deliver their marketing campaign to an abrupt halt.

South Africa have prior to now needed to cope with accusations of ‘choking’ at earlier World Cups and Bavuma admitted it’s a label that can stick after this newest setback.

“I think it will always be there until we find ourselves in a situation where we get to a final and we come out on the right side of that result,” he added.

“Everything was in our hands as a team. We had confidence and belief and the form behind us but we just couldn’t do the business. We had opportunities and we just didn’t take them.”

The loss due to this fact indicators a sudden finish to Mark Boucher’s tenure as South Africa head coach though he was extra measured about whether or not his facet badly misplaced their nerve.

“The more you don’t do well in World Cups, I think it does start playing in your head a bit, I think that’s just natural,” he mentioned.

“I don’t think that’s been the case of late, we’ve played in some tight games in World Cups and actually won them. In the past we’ve tended to lose those games.

“We were never really in this game here, to be fair. On paper, yes we should have won the game but the game’s not played on paper, it’s actually played out there in the middle.”