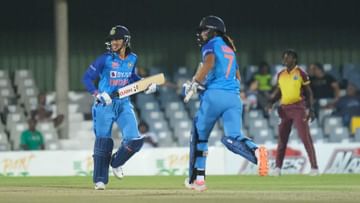 Smriti Mandhana and Harmanpreet Kaur added 115 not out for the third wicket, which played a key role in ensuring India’s victory.

Smriti and Harmanpreet together added 115* runs

History repeats itself and this was also seen in the T20 match played between India and West Indies women’s teams on 23 January. Two Indian batsmen Smriti and Harmanpreet repeated the 4 years old story and while doing so beat the West Indies. This was India’s second match in the T20 Triangular Series, which it won by 56 runs. This is the second consecutive victory of the Indian team. Earlier, India had defeated South Africa in the match played.

India’s victory in the match against the West Indies is a sign of its all-round game. Means India did tremendous batting first. After that he also performed amazingly in bowling and fielding. Indian team managed to win the match due to pushing West Indies on the backfoot in all the three departments of cricket.

In the match, India batted first and scored 167 runs for 2 wickets in 20 overs. India had scored 60 runs for 2 wickets in the first 10 overs. At the same time, in the next 10 overs, he added 107 runs to the score board without losing any wicket. It means that India started slow, but the result was fast. Smriti Mandhana and Harmanpreet Kaur had a big hand in executing the Indian innings fast.

From India, Smriti Mandhana scored an unbeaten 74 off 51 balls, which included 10 fours and 1 six. This is Smriti’s 20th half-century in T20 International. At the same time, Harmanpreet Kaur remained unbeaten after scoring 56 runs in just 35 balls at a strike rate of 160. He scored 8 fours. Smriti Mandhana was adjudged Player of the Match for her anchor inning.