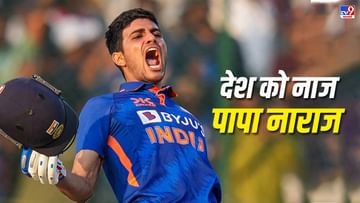 Shubman Gill hit 360 runs in the ODI series against New Zealand, also scored a century in Indore but he said that his father would not be very happy.

Shubman Gill had a chance to score a double century in Indore too!

Shubman Gill also performed brilliantly in the ODI series against New Zealand after Sri Lanka. This right-handed opener has proved his talent. In the New Zealand ODI series, this player scored 360 runs in 3 matches, he got the Player of the Series award. Shubman scored a double century in Hyderabad and a century came out of his bat in Indore. But despite this the father of this player Lakhwinder Singh will not be happy. Shubman Gill told Rahul Dravid. Even Dravid could not believe after listening to Gill’s words.

BCCI has posted a video in which Shubman Gill and Rahul Dravid are in conversation. In this, Rahul Dravid tells this young batsman, ‘Shubman Gill was scoring 50, 60 and 70 runs, after which his father said that you will keep showing only drizzle or will bring rain and storm as well. But now your father will be happy because you have performed well in the last one month and you have managed to bring rain. Dravid was surprised to hear Gill’s answer after listening to Dravid’s words.

Papa will not be very happy: Gill

After scoring a century in Indore ODI, Shubman Gill said, ‘I don’t think father will be very happy. He will definitely tell me that I should have played a bigger innings after the century. Hearing this, Rahul Dravid smiled and said that it is very difficult to live up to your father’s expectations.

Shubman Gill had a chance to score big

Please tell that Shubman Gill scored a brilliant century in Indore ODI. This player played an inning of 112 runs. Gill scored these runs in just 78 balls and 13 fours and 5 sixes came out of his bat. Let us tell you that Shubman Gill lost his wicket in the 28th over and he had a chance to bat for a long time but he caught Conway off Tickner’s ball. Gill had scored a double century in Hyderabad and he had a chance on the Pata pitch of Indore too but he got out.