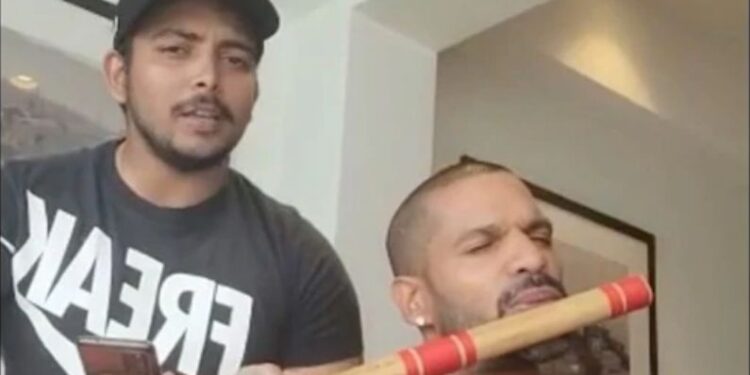 Shikhar Dhawan and Prithvi Shaw are currently on a tour of Sri Lanka for the ODI and T20 series. Here both of them will be responsible for India’s opening.

Before the Sri Lanka series, Shikhar Dhawan and Prithvi Shaw have appeared in the mood for fun.

The Indian team is on a tour of Sri Lanka under the captaincy of Shikhar Dhawan. India has to play ODIs and T20s on this tour. The tour will start from the 18th. Earlier, captain Shikhar Dhawan is in a relaxing mood. A video of him has surfaced with fellow batsman Prithvi Shaw. In this, Dhawan is seen playing ‘Chain Ki Bansi’, while Shaw is showing his singing skills. Shikhar Dhawan has posted the video on his Instagram account. In the caption, he wrote, ‘Today we are together in the tune of Thursday, our superstar singer Prithvi Shaw.’ In this, both the Indian players are seen jugalbandi on the song Mastani this evening.

While Dhawan plays the flute, Prithvi Shaw is seen singing the song. This video was posted in the day on July 15. At the time of writing the news, it was liked by around three lakh people. Shikhar Dhawan has recently learned to play the flute. Some time ago, on the occasion of Father’s Day, he played the tune of an old song for his father. At that time, he played the tune of the song ‘Hon Se Chhu Lo Tum Mera Geet Amar Kar Do’. Apart from this, on many occasions he has demonstrated his art of playing the flute. Dhawan

Dhawan and Shaw are in great color

Shikhar Dhawan and Prithvi Shaw have been posting many funny videos on social media before this. Both the IPL teams also play together in Delhi Capitals. In such a situation, both of them get along well. Now it has to be seen what kind of start this pair will give to India on the Sri Lanka tour. Both the batsmen have been in good form in recent times. Dhawan played some amazing innings in IPL. Earlier, he has batted well for India as well.

Talking about Shaw, he has been scoring runs since he was dropped from Team India on the tour of Australia. He scored the most runs in the Vijay Hazare Trophy. Then this batsman was a hit in IPL too. After a brilliant game against Sri Lanka, Prithvi Shaw can go to England. After the injury of Shubman Gill, there was also a demand from the team management to send him.

read this also: Either a doctor or an engineer, you will be stunned to know the education of Indian cricketers’ wives!