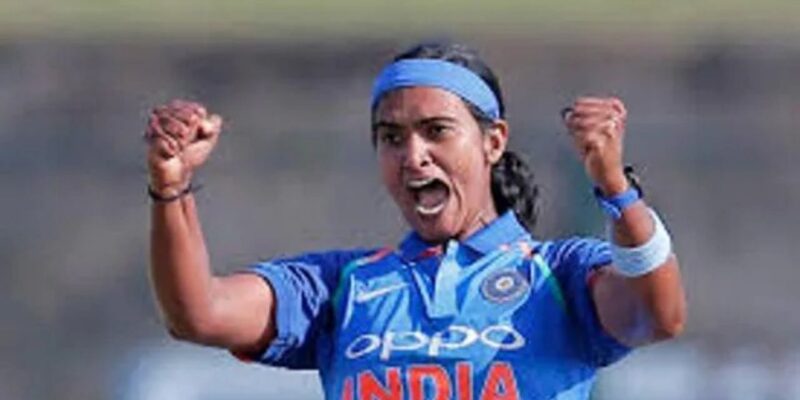 Shikha Pandey’s bowled ball is being praised a lot.

The Indian women’s cricket team is currently on a tour of Australia. At present both the teams are playing T20 series. Today on Saturday, the second T20 match was played between the two teams in which India lost by four wickets. But in the midst of this defeat, a player from India has come into the limelight and he is also getting a lot of praise. The name of this player is fast bowler Shikha Pandey. Shikha has done such a thing in this match that the viewers were surprised. He did such a miracle with one of his balls that the good and the good would be surprised. During this match, he bowled such a ball which has troubled the batsman but the onlookers were also forced to think.

The Australian team, chasing the target given by India, had a great start. Alyssa Healy hit a four off the very first ball. Shikha Pandey was bowling this over. But after this, the way Shikha threw the next ball, she took the sticks of Hilli. The special thing about this ball was its swing. Shikha threw the ball far outside the off-stump and this ball came in and hit Hilly’s middle stump. The amount of swing this ball made surprised everyone. Healy had to return to the pavilion in despair.

Batting first, India scored 118 runs for the loss of nine wickets in 20 overs. Shikha, of course, had given India a big success by dismissing Healy, but the Australian team was successful in achieving this target five balls ago. He lost his six wickets. Pooja Vastrakar played a strong innings for India in the last over and scored 37 not out off 26 balls with the help of three fours and two sixes. Pooja hit three fours and two sixes in her innings. Apart from him, Indian team captain Harmanpreet Kaur played an innings of 28 runs in 20 balls. He hit five fours. Chasing the target easily, Australia had a bad start but the hosts made a comeback and won the match. For that, Tahila McGrath scored 42 runs in 33 balls with the help of six fours in the lower order. Apart from him, Beth Mooney scored 34 runs in 36 balls with the help of four fours.

IPL 2021: In Mumbai Indians’ six-year statistics, the numbers of 1 and 5 have been special, know what is this math

The death of Hezbollah terrorist ‘Ali Atwa’ involved in 1985 plane hijacking, America had kept a reward of 5 million dollars

Farmers can earn well by cultivating bottle gourd, how much is its area in Maharashtra?