Shakib Al Hasan’s hooliganism in the live match, kicked the umpire on the wicket, then uprooted the stump – Video 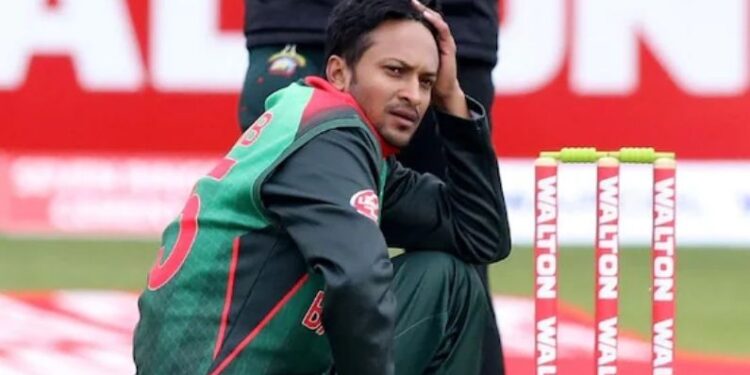 Shakib Al Hasan, the former captain of the Bangladeshi cricket team, made a comeback a few months back after the ban imposed by the ICC.

Shakib Al Hasan has been the captain of Bangladesh (File Pic)

On the cricket field, bowlers always try to get the batsmen out in some way. They have many methods for this. Players can be dismissed by many other rules including catch, lbw, run out, bowled. However, many times it has to be pleaded in front of the umpire. If the LBW appeal is rejected, the bowler tries to bowl the batsman down the stump next time. This happens too. Something similar happened in a match of the Dhaka Premier League going on in Bangladesh, where the umpire rejected the LBW appeal, then the bowler dropped the stumps. The only difference is that this wicket was dropped not with the ball, but by kicking in anger, and this is a bad-acting cricketer – Bangladesh’s legendary all-rounder Shakib Al Hasan (Shakib Al Hasan).

The match between Mohammedan Sporting Club and Abahani Limited on Friday 11 June in the Dhaka Premier League saw some such scenes, which are occasionally seen in matches held in a street or in the field. Shakib, the former Bangladesh captain and world number one all-rounder, showed such hooliganism during the match, which surprised everyone. Shakib showed his bullying not once, but twice in the same match.

In this rain-affected match, Shakib Al Hasan, captaining Mohammedan Sporting, first showed his misbehavior in the fifth over. On the last ball of his over, he appealed for LBW against the batsman, but the umpire declared it not out. In a fit of rage, Shakib immediately kicked the stumps hard in front of the umpire and then started arguing. The matter was settled that Shakib crossed all limits in the next over.

After the fifth ball of the sixth over, due to rain, the umpire signaled to bring covers on the ground. Shakib got angry this time too and ran straight in front of the umpire and slammed the three stumps hard. Then picked up a stump and buried it back.

Shakib Al Hasan completely loses it – not once, but twice!

Wait for when he pulls the stumps out 🙈 pic.twitter.com/C693fmsLKv

In comparison to Dhaka Premier League, live streams are being done on YouTube and Facebook and in such a situation, the video of Shakib’s two mischievous antics has become fiercely viral and there is a demand for action against him.

However, after this the veteran all-rounder apologized by writing a post on his Facebook page and said that he would hope that something like this does not happen again. Shakib wrote, “I am sorry to express my annoyance and spoil the fun for the people watching the match sitting at home. An experienced player like me should not have reacted like this, but sometimes it happens unfortunately in adverse situations. I apologize to the teams, management, tournament officials and the organizing committee for this human error. Hopefully I won’t do something like this again in the future.”