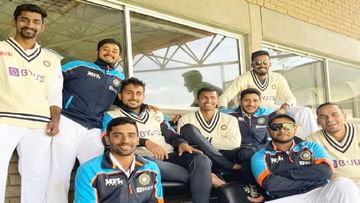 Abhimanyu Easwaran may get a place in the team in place of Rohit Sharma in the Test series against Bangladesh. Rohit out of tour due to injury.

Easwaran to replace Rohit Sharma in Test series against Bangladesh

Team India has had a disappointing performance in Bangladesh. Rohit & Co. lost the first two ODIs and the series also went out of their hands. At the same time, after this defeat, there was another big setback. captain Rohit Sharma Due to injury, Bangladesh got out of the tour itself. Meaning Rohit will not be able to play Test series as well and now a young player can get a chance in his place. The name of this young batsman is Abhimanyu Easwaran who has scored two centuries in two consecutive matches against Bangladesh-A.

Abhimanyu is in amazing form

Abhimanyu Easwaran’s form is amazing at the moment. This player has scored a century in three consecutive matches. Before scoring two centuries against Bangladesh-A, this player has also scored a century against Services in Vijay Hazare Trophy. Prior to that, Easwaran had played a half-century innings against Railways as well. Easwaran has scored 498 runs in the last four innings. In such a situation, the team will only benefit from his arrival in Team India.

India A continued their dominance on Day 2 with openers Yashasvi Jaiswal (145) and captain Abhimanyu Easwaran (142) putting on a massive 283-run stand. At Stumps, India A are 404-5 and lead by 292 runs.

Umran Malik and Mukesh Kumar also in the race

Mukesh Kumar is currently playing for India A against Bangladesh. He took 6 wickets in the first innings of the second unofficial Test against Bangladesh-A. It remains to be seen whether he gets rewarded for his good performance or not.