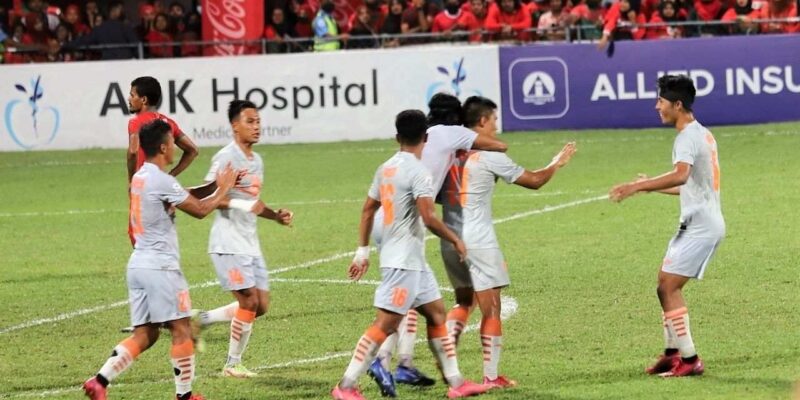 Indian football team has made it to the final of the SAIF Championship.

The Indian football team defeated Maldives 3-1 in the match played on Wednesday night to reach the finals of the SAFF Championship, thanks to the brilliant two goals of its captain Sunil Chettri. has taken. Chhetri scored for India in the 62nd and 71st minutes. Manveer Singh scored the first goal for India in the 33rd minute. To reach the final, India had to win this match in any case, in which she was successful and made it to the final. Ali Ashfaq scored the only goal for Maldives in the 45th minute. The Indian team has reached the final for the 12th time.

This was Chhetri’s 124th international match and now he is just one goal behind Argentine football great Lionel Messi’s 80 international goals. Messi is second in the list of players with the most goals on the international stage. Before him is Cristiano Ronaldo of Portugal. Ronaldo has 115 goals to his name. In the final, the Indian team will face Nepal on 16 October. Nepal played a 1-1 draw with Bangladesh in another match. India reached the final with eight points in the five-team table, while Nepal has come with seven points. India defeated Nepal 1-0 in the league round.

domination from the start

India dominated the match from the very beginning. Chhetri gave India the lead in the 27th minute but his header went over the crossbar. The very next minute Ashfaq put India in trouble though his shot did not hit the target and the defender blocked it. Five minutes later, however, India opened the account. Manveer hit the best shot, whose answer was not with the goalkeeper of Maldives. India were looking to end the first half with a lead but Ashfaq equalized the score by scoring a goal a few seconds before half time.

India scored two goals in the second half

In the second half, India increased its aggression. Team coach Igor Stimach made the change and sent Udanta Singh in place of Brendan Fernandez in the 51st minute. India got success in the 62nd minute. A cross came to Manveer, which he stopped from his chest and, taking time, gave the pass to Chhetri. Chhetri made no mistake in getting the ball into the net. In the 71st minute, the Indian captain scored another goal. That time he scored this goal with his header and gave India a two-goal lead.

T20 and ODI player, record made in first century itself, making a comeback from mental illness