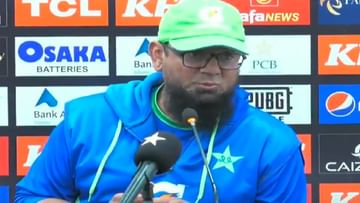 The first day of the Rawalpindi Test was very bad for the Pakistan cricket team. England scored 506 runs on the very first day and four of its batsmen scored centuries.

England scored 506 runs on the first day of Rawalpindi Test

for Pakistan cricket team rawalpindi test The first day was no less than a nightmare. The Pakistani team was thrashed in its own home in such a way that the world kept watching. England scored 506 runs on the first day of the Rawalpindi Test. The great thing is that this match had to be stopped in 75 overs due to bad light. Means there were still 15 overs left in the day, if they were completed then England’s score could have crossed 600. Pakistani bowlers bowled very badly on the first day of the game but somewhere the pitch of Rawalpindi Stadium was also very flat. The head coach of the team, Saqlain Mushtaq also said this thing in gestures.

After the end of the first day’s play, Pakistani head coach Saqlain Mushtaq addressed the media where he was asked questions about the Rawalpindi pitch. Saqlain Mushtaq said in response, ‘Today was a good day for England. People had a lot of fun. But I think the pitch should be more helpful for the bowlers. We had seen similar pitches against Australia as well.

There is no doubt that the Rawalpindi Test pitch was flat, but it is also true that Pakistan’s bowlers bowled with very poor line-lengths. Pakistan’s young bowling attack looted 7 runs per over. England put pressure on the Pakistani bowlers from the very first over. Jack Crowley and Ben Duckett shared a 233-run partnership in just 35.4 overs.

🗣️ “Today was very exciting from England’s point of view. People enjoyed it a lot. I think the pitch should have been a bit more supportive (for the bowlers).” Saqlain Mushtaq#PAKvENG pic.twitter.com/jx9rxEtlHX

Let us tell you that Jack Crawley played an inning of 122 runs in 111 balls. And Duckett scored 107 runs. Wicketkeeper Olly Pope played an inning of 108 runs in 104 balls. Joe Root got out after scoring 23 runs but Harry Brook landed at number five and hit an unbeaten 101 runs. England batsmen batted fearlessly. Three of his four centenarians reached the century with a strike rate of more than 100.


This world record was made on the day of Rawalpindi test