Rohit Sharma met New Zealand players, took a photo together before the match 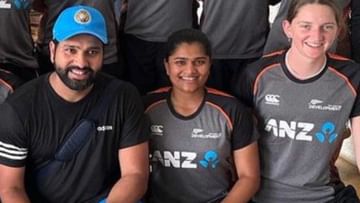 The first T20 match of the Under-19 women’s team of New Zealand on the tour of India is being played in Mumbai. Before this match, Rohit was seen with New Zealand’s Under 19 women players.

Rohit Sharma is not the captain of Team India on New Zealand tour. He has been rested from this tour. Rohit Sharma Currently in Mumbai. But even being in Mumbai, he met the Kiwi players. Now you must be thinking how is this? So his meeting with Kiwi players has nothing to do with New Zealand men’s team. Rather, it is New Zealand’s Under-19 women’s team which has come on India tour to play T20 series.

The first T20 match of the Under-19 women’s team of New Zealand on the tour of India is being played in Mumbai. Before this match, Rohit was seen with New Zealand’s Under 19 women players. He met him before the match and then also took a photo.

White Fern has shared the pictures of Rohit Sharma’s meeting with New Zealand Under-19 women players on social media. In this picture you can see the Indian captain sitting in the first row.

Our NZ Development team catching up with @BCCI star Rohit Sharma ahead of his T20 against India U19 tonight 🏏#INDvNZ #CricketNation pic.twitter.com/WcYUN0zMKM

A series of 5 T20 matches is to be played between the Under 19 women’s cricket teams of India and New Zealand. All the matches of this series are to be played in Mumbai. These matches will be played from 27 November to 6 December.

The toss has taken place in the first T20 between the two teams, where the New Zealand Women’s Under-19 team has won the toss and decided to bat first.


Rohit not with the team on New Zealand tour

Let us tell you that under the leadership of Rohit Sharma, the journey of Team India came to an end in the semi-finals of T20 World Cup 2022. After that the Indian team had to go to New Zealand with the intention of playing T20 and ODI series. But many senior players were rested from this tour and new players got a chance in their place.