Rohit is sometimes ahead of Gill, who won the race to complete the century? 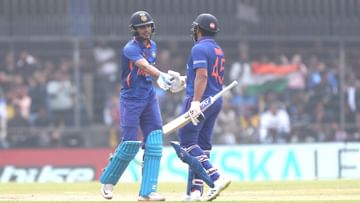 There was a fierce race between Rohit Sharma and Shubman Gill to complete the century first. Sometimes Gill went ahead and sometimes Rohit went ahead of him.

Rohit Sharma and Shubman Gill wreaked havoc with the bat in the third ODI against New Zealand. Together they thrashed the Kiwi bowlers a lot. Rohit and Gill shared a 212-run partnership together. Both entertained everyone a lot with their batting, but the race between Gill and Rohit was more fun than the batting of the two. In the third match between the Indian captain and Gill, there was a tremendous race to complete the century first. The contest between the two started from the very first ball of the match, but it happened after the thrilling 12th over.

@ShubmanGill , @ImRo45 is on fire 🔥 Another tone for both the openers. 💯😎 RECORD: 💯 for Rohit and 💯 for Shubman within 26th over#IndiaVsNewZealand pic.twitter.com/s8MwHB77JJ

More thrilling contest in 23rd over

Rohit scored 91 runs in 68 balls for 21 overs. While Gill, who completed his half-century before him, lagged a bit in this race and reached only 79 runs in 58 balls. The race became more exciting in the 23rd over. Gill hit a six and a four in this over and reached 91 runs. Rohit was on 94 runs. After reaching close to the century, the race between the two became more exciting.