Ravindra Jadeja dominated the practice match of Team India, showed the power of the bat even on the last day, the match ended in a draw 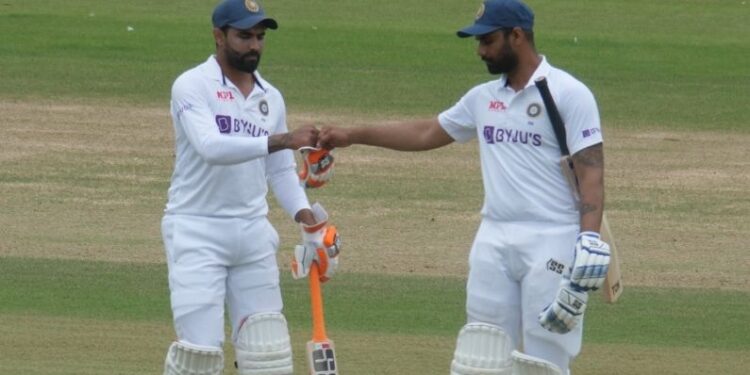 This was the only match that Team India had for practice before the five-match Test series between India and England starting on August 4. Now the team will practice among themselves through nets sessions.

Ravindra Jadeja scored half-centuries in both the innings of the practice match. (Photo: BCCI)

Before the five-match Test series against England, the only practice match of the Indian team being played in Durham ended without any result. Thursday 22 July was the last day of this match between India and County Select XI and both the teams batted in their respective second innings. India set a target of 284 runs for the win in front of the county team on the last day, but it was agreed to end the match on a draw only after 16 overs of play. Indian bowlers could not take any wicket of the county team in the second innings. Ravindra Jadeja, KL Rahul, Mayank Agarwal and Umesh Yadav emerged with the best performance for India in this match.

India started their second innings on the last day of the match on Thursday. This time, instead of captain Rohit Sharma, Mayank Agarwal and Cheteshwar Pujara came for the opening. Both the batsmen got the team off to a good start and shared 87 runs while scoring runs at the right pace. Mayank Agarwal, however, could not complete his half-century and was dismissed after scoring 47 runs. At the same time, Pujara once again could not convert a good start into a big score and returned to the pavilion after scoring 38 runs.

In this innings, Ravindra Jadeja was promoted and coming at number four, he shared a good partnership with Hanuma Vihari. Both batted softly and kept the innings in check. During this, Jadeja scored his second half-century in the match. He retired after scoring 51 runs. Earlier also he had scored 75 runs in the innings. While Hanuma Vihari remained unbeaten on 44 runs. There was a partnership of 84 runs for the third wicket between the two. India declared their second innings at 192 for 3, in response to which County XI scored 31 runs without losing a wicket.

Two losses from the practice match

However, how much the Indian team benefited from this practice match, it will be known only after the start of the Test series, but a big loss has definitely been done. In this practice match, two players of the team, fast bowler Avesh Khan and all-rounder Washington Sundar, got injured and according to the information, both have been ruled out of this tour. Incidentally, both the players were playing for County XI. On the first day, Avesh Khan suffered an injury on the thumb of his hand, which was found to be fractured after the scan. On the other hand, Sundar got hurt in his finger while batting on the second day and he is also reported to be out of the series. However, Sundar did field on the last day of the match and also took a catch. So it is not clear how serious the injury is. At present, the BCCI has not issued an official statement on the availability of both the players.

Also read: In England, 4 batsmen created chaos, worked with fours and sixes, made the team’s name shine by making a historic score