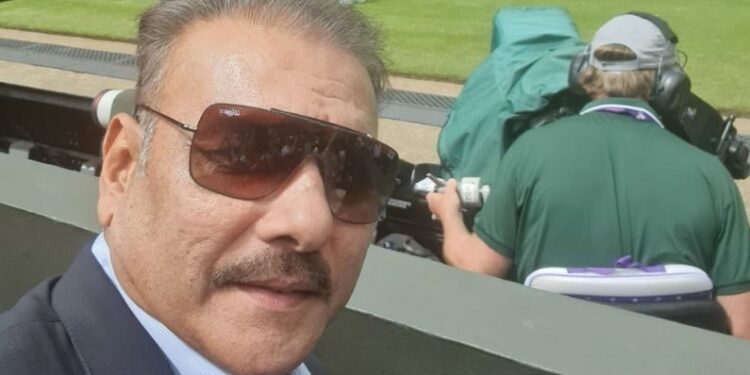 The Indian team is currently on a tour of England where they have to play a five-match Test series from August 4 but at this time the team is enjoying a break.

Wimbledon, the third Grand Slam of the year, is on the verge of ending. The men’s singles final is being played on Sunday where Novak Djokovic of Serbia will face Italy’s Matteo Barrettini. Wimbledon is a tournament in which the stars of every sport arrive and enjoy the match on the center court. Players like Sachin Tendulkar and Virat Kohli have been seen here. At this time the Indian Test team is also in England and is on break. In the midst of this break, the head coach of the Indian team, Ravi Shastri, has come to watch the final match.

Shastri gave this information while sharing a photo on Twitter. Shastri tweeted a recent photo of himself from Centro Court and wrote, “Enjoying a wonderful experience at Court. Djokovic vs Berrettini. Wimbledon.”

This year Shastri has come to watch Wimbledon match for the second time. Earlier, on July 1, he had reached Center Court to watch Roger Federer’s match. Even then, Shastri had given information by sharing the photo on Twitter. Shastri tweeted, “Happy to be back on Sunny Day at Wimbledon. Fantastic tradition. The Center Court is looking fabulous.”

Series to be played against England

India is currently on a tour of England. They were defeated by New Zealand in the final of the ICC World Test Championship here and now they have to play a five-match Test series against England, which starts on August 4. Meanwhile, the team is on a 20-day break. The team will again go into the bio bubble on July 14.

Both shed sweat in the semi-finals

Italy’s Matteo Berrettini, seventh seed, defeated Poland’s Hubert Hurkach to make it to the file. With this, he has made it to the final of a Grand Slam for the first time in his career. Berrettini defeated Hurkach 6-3, 6-0, 6-7(3), 6-4 in the semi-finals that lasted two hours and 37 minutes to enter the title match. Berrettini also became the first Italian player to reach the final of Wimbledon. This is Berrettini’s 11th victory on the grass court.

In the second semi-final, Djokovic played a brilliant game to beat Canada’s Denis Shapovalov 7-6 7-5 7-5 in straight sets. Djokovic has made it to the Wimbledon final for the 7th time. Djokovic, 34, has achieved his 101st victory on the grass court and is now just one step away from winning a record 20 Grand Slams. This win has brought him closer to the Golden Slam.