Prasad openly took the class of Australian veteran, was giving knowledge on ‘Mankading’ 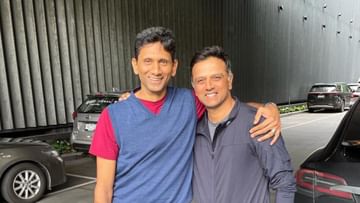 Former Indian fast bowler Venkatesh Prasad has lashed out at former Australian batsman Mark Waugh on Twitter for one of his tweets.

In the first ODI between India and Sri Lanka in Guwahati, Mohammed Shami tried to run out Dasun Shanaka at the non-striker’s end. Earlier it was called Mankading. However, this effort of Shami was overturned by Rohit as he withdrew the run-out appeal. After this, this was also seen in the Women’s Under-19 World Cup. Whenever the issue of Mankading comes, world cricket gets divided into two parts and cold war starts. Something similar is being seen between former Australian batsman Mark Waugh and former Indian fast bowler Venkatesh Prasad.

Former Indian fast bowler Venkatesh Prasad on Monday took a dig at legendary Australian cricketer Mark Waugh for saying that teams are deliberately using Mankading to get wickets. Waugh said that the worst thing is to legally dismiss the batsman who is leading before the ball has been bowled at the bowling end.

This happened in the Under-19 World Cup as well

After Shami, in the Women’s Under-19 World Cup being played in South Africa at this time, Pakistan’s bowler ran out the batsman in the same way. Commenting on the video of Pakistan fast bowler Zaib-un-Nissa being run out during the World Cup by a Rwandan batsman standing at the bowling end for going too far before throwing the ball, Waugh tweeted: “Worst thing, it seems.” It is believed that the teams are using it in a thoughtfully planned manner to get wickets.

To this Prasad replied, yes well, the worst thing is for the bowler to plan to get a player out legitimately. The batsman wants to take unfair advantage by not staying at the crease, that is the best thing.

Yes right , Bowlers planning to get a player out by legal means is the worst thing Batsman wanting to take unfair advantage by not staying back in the crease is the best thing 😃 https://t.co/6BLpyLDiAP

After what Shami had done, this issue once again became hot and again the same was seen a day before in the Under-19 World Cup. Whenever there is talk of Mankading, India’s off-spinner Ravichandran Ashwin definitely keeps his point on it because Ashwin has done this in IPL, he vocally says it right. Even on Shami’s attempt to get Shanaka out at the non-striker’s end, Ashwin kept his point and supported him. He also raised questions on Rohit Sharma’s decision to withdraw the appeal.