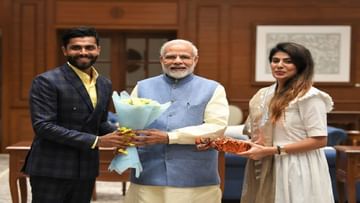 Ravindra Jadeja is currently on a break from cricket and he is campaigning for his wife Rivaba. Let us tell you that Rivaba is the BJP candidate from Jamnagar.

When Modi said to Dhoni – Jadeja is his own boy

Ravindra Jadeja is currently playing in the field of politics instead of cricket. Please tell that his wife Rivaba has got BJP ticket from Jamnagar and this all-rounder of Team India is campaigning. between assembly elections Ravindra Jadeja Narrated a story of PM Modi and their meeting during an interview in which Dhoni is also involved. Jadeja told that when he met PM Modi for the first time, Captain Dhoni had introduced him and after that the answer given by the Prime Minister touched Jadeja’s heart.

In an interview given to Free Press General, Ravindra Jadeja said, ‘We were about to play a match against South Africa at Motera Stadium. MS Dhoni was the captain of the team at that time and he introduced me to Modi ji. Mr. Modi himself said that brother, he is our own boy, take care.

Jadeja’s happiness was no where

Ravindra Jadeja said that he was very happy when a big personality like Narendra Modi said such a thing about him. Please tell that Ravindra Jadeja is the star player of Team India. In the last 2-3 years, he has performed well for the team, that is why he is very popular not only in India but all over the world.

When will Jadeja return?

Now the question is when will Ravindra Jadeja return to the cricket field? Jadeja was injured during the Asia Cup and because of that he was ruled out of the T20 World Cup. Team India missed Jadeja. Now Jadeja is not a part of the team even in the series against New Zealand. It is believed that this player can make a comeback in the Test series against Bangladesh.


Recently Jadeja has been retained by Chennai Superkings. Jadeja could not perform well in IPL 2022. He got the captaincy and in the middle of the tournament, Dhoni became the captain again. Jadeja left the tournament after this, after which there was speculation that Jadeja could now part ways with Chennai Super Kings, although this did not happen.