Played 7 matches, the player created panic, snatched victory from England by hitting 4 consecutive sixes in the last over 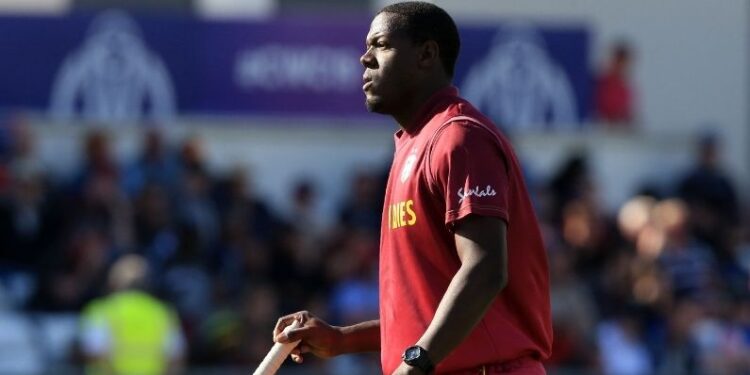 During the IPL auction, the Delhi team made a bid of Rs 4.2 crore on this player while his base price was only Rs 30 lakh.

West Indies have high hopes from Carlos Brathwaite but they have not been able to show consistent performance so far.

19 runs are needed in 6 balls to become world champion. A batsman on strike who could only score 23 runs in the tournament before the match. But he did a miracle. He hit four sixes in four consecutive balls of the last over and made the team world champion for the second time. The player who did this feat had played only seven International T20 matches before the final match. But after hitting four consecutive sixes, his name started being called all over the world. Talking about West Indies all-rounder Carlos Brathwaite. Who had hit four consecutive sixes in the final match against England in the 2016 World T20. He did this feat in front of Ben Stokes. Today this thing is because Carlos Brathwaite was born on this day in 1988.

In the final match played in Kolkata, England, batting first, scored 155 for nine on the basis of Joe Root’s half-century. In response to this the condition of West Indies was bad. Batsmen like Johnson Charles, Chris Gayle and Lendl Simmons had settled on 11 runs. But Marlon Samuels took one end. But wickets kept falling from the other side. Apart from Dwayne Bravo scoring 25 runs, Andre Russell (1) and Darren Sammy (2) were dismissed after scoring runs. Due to this, West Indies needed 19 runs to win in the last over. Samuels was unbeaten on 85 off 66 balls with nine fours and two sixes but he did not have the strike. Carlos Brathwaite was on strike.

All the main bowlers of England had completed their overs. In such a situation, captain Ouen Morgan threw the ball towards Ben Stokes. He had bowled two overs earlier in the match and conceded only 15 runs. But in the last over everything became dusty. The first ball landed on the leg stump and it was sent by Brathwaite over deep backward square leg for six runs. Brathwaite sends the second ball over long on for a six. Due to this, only seven runs were needed in four balls.

The third ball did not come right on Brathwaite’s bat but went for six runs over long off. Now only one run was needed. On this also the West Indies batsman sent the ball over deep midwicket and scored six runs and gave the team a four-wicket victory. Commentator Ian Bishop said about this innings, ‘Carlos Brathwaite, remember the name.’ This line of his became very popular.

He also played a quick innings in the 2019 World Cup.

The identity of Carlos Brathwaite is that of the all-rounder batting in a fast fashion. He had come in the West Indies team only in 2011 but the game was not special and got out. The process of going in and out of the team continued. During this, he played the biggest innings of his ODI career in the 2019 Cricket World Cup. He scored 101 runs in the match against New Zealand, which is his only century in international cricket. Due to this, he took the team closer to victory but in an attempt to hit the winning six, he was caught near the boundary.

During the IPL 2016 auction, Delhi Daredevils placed a bid of Rs 4.2 crore on him while his base price was only Rs 30 lakh. However, he did not succeed in the IPL. He was also a part of Sunrisers Hyderabad and Kolkata Knight Riders in this tournament. Carlos Brathwaite has taken 181 runs and 1 wicket in three Tests, 559 runs and 43 wickets in 44 ODIs, 310 runs and 31 wickets in 41 T20Is.