Only a few Indian players will be involved in the opening ceremony of Tokyo Olympics 2020, because of this the decision was taken 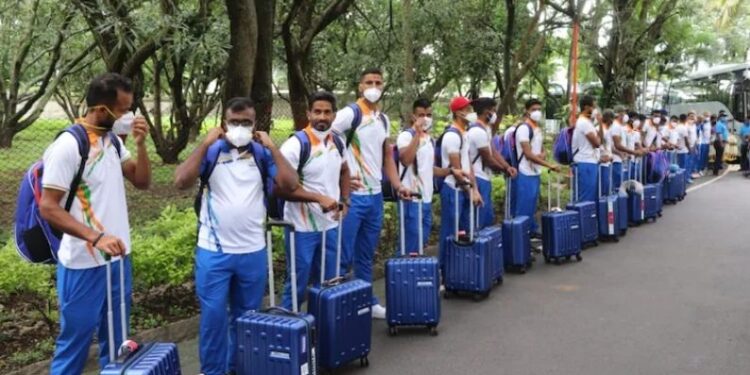 More than 120 players from India are participating in the Tokyo Olympics 2020 while the Indian contingent comprises a total of 228 members including officials, coaches and other support staff.

Most of the Indian players have gone for the Tokyo Olympic Games.

In view of the threat of COVID-19, the participation of Indian players in the opening ceremony of the Tokyo Olympic Games to be held on Friday will be kept to a minimum and only six officials from the team are allowed to participate in it. has been found. India’s Deputy Chief of Mission Prem Kumar Verma told PTI that the players who have to take part in the competition the next day have been instructed not to take part in the opening ceremony. Indian Olympic Association (IOA) Secretary General Rajeev Mehta said that due to the risk of infection, not many players will be kept in the opening ceremony. Mehta said, ‘We will try to field less players. There (opening ceremony) at least players will be fielded. Team chief and deputy team chief will decide on the number of players tomorrow but we are of the opinion that at least players should participate to ensure their safety at this critical time.

More than 120 players from India are participating in the Games while the Indian contingent comprises a total of 228 members including officials, coaches and other support staff. Verma did not reveal the names of the officials who would be attending the meeting after the mission chiefs. “Six officials (from each country) will be allowed to participate in the ceremony but no limit will apply to the players,” he said. However, we have advised the players who have competition the next day not to participate in the event and concentrate on their game. The celebrations are expected to go on till midnight so it is better that they take rest for their competitions to be held the next day.

Shooters will not go to Olympic Ceremony

While 10m air pistol shooters Saurabh Chaudhary, Abhishek Verma, Apurvi Chandela and Elavenil Valarivan will be competing on the first day, while Manu Bhaker, Yashaswini Singh Deswal, Deepak Kumar and Divyansh Singh Panwar will target on the second day at the opening ceremony of the Games on Friday. will not attend. The Indian team has eight rifle, five pistol and two skeet shooters, besides six coaches and a physio. Team chief BP Baishya said that the decision on the number of Indian players participating in it will be taken on Thursday.

Manpreet and Mary Kom will be the flag bearers

Apart from shooters, boxers, archers, men’s and women’s hockey teams are to compete on the next day of the opening ceremony. A source in the boxing contingent told PTI, “Those who do not compete on Saturday will take part in the event.” India has made men’s hockey team captain Manpreet Singh and six-time world champion women’s boxer MC Mary Kom as flag bearers for the opening ceremony. Mary Kom is not to take part in the games the next day but Manpreet will lead the Indian team in the Pool A match against New Zealand the next day.

Verma said about the players and officials who recently arrived in the city of Japan, ‘Those who are in quarantine will also not be allowed to participate.’ According to media reports on Wednesday, more than 30 British athletes will not take part in the opening ceremony due to the threat of COVID-19. There are 376 athletes participating in the UK Olympic Games.

read this also: Tokyo Olympics 2020: Indian rifle shooters got only 20 minutes to practice, boxers had to prepare in the sports village