One mistake and 163 runs looted, what happened before Shubman Gill’s double century? 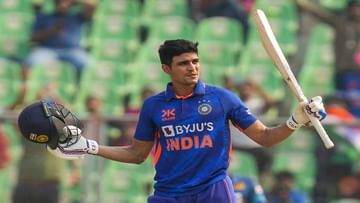 New Zealand had to give life to Shubman Gill

in Hyderabad ODI Shubman Gill Won hearts with his batting. Shubman scored a brilliant double century while batting record-breaking. This right-handed batsman played an inning of 208 runs in 149 balls, in which 19 fours and 9 sixes came out of his bat. Please tell that Shubman Gill has scored a double century at the age of just 23 and he has become the youngest batsman to score a double century. By the way, let us tell you that Gill would not have been able to reach this double century if wicketkeeper Tom Latham had not made a mistake.

Let us tell you that in the 19th over there was a big mistake from Tom Latham. He had given life to Shubman Gill. Gill went ahead and played a shot on Bracewell’s ball, after which the ball took the edge of his bat and after that Latham neither caught him nor could he stump Gill out. Please tell that when Gill got this life, Shubman Gill was only on 45 runs at that time.

Shubman Gill took the news of New Zealand bowlers fiercely after getting life. Gill completed his half-century by hitting a six and after that he reached the century in 87 balls. Gill changed his batting gear after completing the century and this player hit 7 sixes after the century. Gill hit 150 runs in 122 balls and then he reached his double century in 145 balls.

Shubman Gill has done wonders in ODIs. This player completed 1000 runs in just 19 matches. This player has become the fastest player to score 1000 ODI runs for India. Please tell that Gill has scored 1102 runs in 19 ODIs at an average of 68.88. His strike rate is 109 and he has scored 3 centuries and 5 half-centuries. Shubman Gill was the highest ODI run-scorer for India last year as well and his average was over 70. This time again Gill has scored a century in two consecutive matches. Now this player’s World Cup ticket is being considered confirmed.