One brother wreaked havoc with the bat for 38 minutes, two brothers applauded watching on TV, the love of 3 brothers shown in England cricket, VIDEO 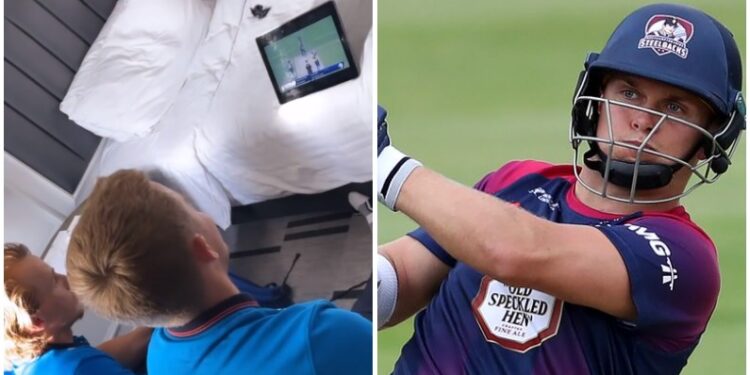 Brother-brother love was seen in England cricket, when one brother was seen standing on the field and thrashing the bowlers and the other two saw him cheering on the other.

The relation of brothers is also very sweet and precious. And, the swirling love of this relationship is visible again and again. Just like 3 brothers have been shown in England cricket. Just like the Karan brothers of England cricket i.e. Sam Curran, Tom Curran and Ben Curran have shown. In these, Sam and Tom have represented England at the international level. But Ben is waiting for this special moment. However, here we are talking about the T20 Blast league being played in England and Ben Curran’s 38-minute amazing and destructive innings played in it, which Sam Curran and Tom Curran saw together on TV. Woke up Seeing his brother creating a ruckus with the bat, he got giddy.

The amazing thing is that two brothers witnessing the explosion of a brother’s bat were captured by another England cricketer Sam Billings in his camera. He has also shared it on his Instagram story. In this video you can see Sam and Tom celebrating the ruckus created by Ben’s bat. Sam and Tom were jubilant after watching every single shot made by Ben Karan on TV.

This is cute – Sam Curran and Tom Curran watching the batting of their brother Ben Curran in #T20Blast – he scored 62 runs from 33 balls including 11 fours and 1 six against Durham.

Ben Curran plays for Northamptonshire in T20 Blast. And his latest blast with the bat is of the match against Durham, which was played on 30 June. In this match, Northamptonshire batted first and scored 173 runs for 5 wickets in 20 overs. Ben Curran spent 38 minutes at the crease and faced 33 balls and scored 62 runs at a strike rate of 187.87. Ben’s innings included 11 fours and 1 six. That is, 25-year-old Ben Karan scored 50 runs of his innings only from the boundaries.

Northamptonshire set a target of 174 runs in front of Durham, thanks to the excellent innings of Ben Curran. In response, Durham’s team was bundled out for 143 runs and lost the match by 30 runs. Ben Stokes could not even open the account with Durham’s bat. Although he did a little amazing with the ball and took 2 wickets giving 37 runs in 4 overs.

Also read: The top order was dispersed in 12 balls, the 32-year-old all-rounder had the power, the match ended in a pinch