New Zealand is India’s headache, how strong is the Kiwi team even without 3 players 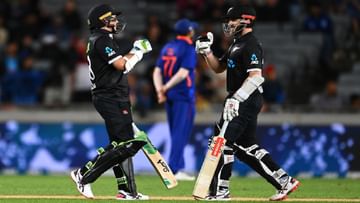 India vs New Zealand: India will play 3 ODI series against New Zealand. Although the Kiwi team will take the field without Kane Williamson, Tim Southee and Trent Boult.

India made a clean sweep of Sri Lanka in the 3 ODI series. Now New Zealand has a big challenge in front of India. A series of 3 ODIs will be played between India and New Zealand from 18 January. For the first time, the Kiwi team will play without its 3 important players Kane Williamson, Tim Southee, Trent Boult. Despite this, the Kiwi team remains a headache for India. Despite not having 3 players, New Zealand is very strong. The New Zealand team has reached India directly from Pakistan. Kiwi players had created a lot of havoc with both bat and ball on Pakistan’s soil.

In the absence of 3 experienced players, New Zealand’s strength may seem a little less, but it is not so. The team is full of such players, who are just waiting for the opportunity and as soon as they get the chance, they also bring the storm with them. Pakistan’s tour of New Zealand is a witness to this.

Latham is in form

What if Kane Williamson is not there, Tom Latham is leading the team against India, who scored a century and 2 half-centuries in 2 Test matches against Pakistan. Scored 42 runs in the first ODI as well. He is the top spin player.

New Zealand’s biggest weapon is Devon Conway, who scored 2 centuries and 2 half-centuries on the Pakistan tour. Was the player of the series after scoring a total of 153 runs in the ODI series. When India went on New Zealand tour last year, Conway’s bat went against the Indian bowlers. The biggest challenge before the Indian bowlers will be to stop Conway.

For the last year and a half, Glenn Phillips has been doing wonders in limited overs cricket. Phillips scored an unbeaten half-century against Pakistan to give New Zealand a 2-wicket win in the third ODI. He is in full form. In the absence of Tim Southee, Trent Boult, Ish Sodhi has the responsibility of handling the bowling department. Indian batsmen need to be careful with Sodhi. He had torn Pakistan to shreds. He took 8 wickets in the first test. Took 5 wickets in the second. He also took 3 important wickets in 2 ODIs. Along with the ball, he is also contributing with the bat in the lower order. He scored a half-century in the Karachi Test.

WhatsApp Message Pin Feature: Group members who have a lot of messages will benefit from…