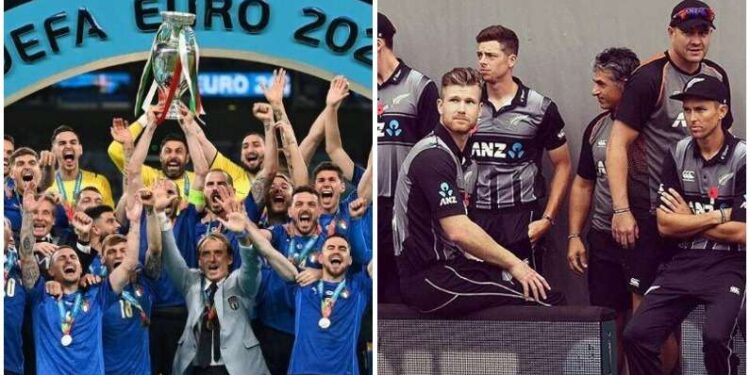 The final of Euro 2020 played between Italy vs England resulted in a penalty shootout, in which Italy defeated England 3-2.

By the way, the excitement of Euro 2020 is over. Its turmoil has stopped with the victory flag of Italy over England. But, now the ruckus has started regarding this. New Zealand cricketers have created a ruckus by questioning the Euro 2020 final, its outcome. Yes, from current to former players associated with Kiwi cricket, have targeted Europe’s biggest tournament. He’s taken aback. This is because they have not digested Italy’s victory over England in the final. According to him, England should have become the champion.

The Kiwi cricketers who have raised such questions on the Euro 2020 final and its outcome are Jimmy Neesham and Scott Styrish. Both of them have wrapped up Euro 2020 after the final result. Before telling what questions they raised, let us also tell you that they have done this only for the purpose of taking a pinch. But the question is a question, whose flames rise only when such a thing happens in the mind.

The Euro 2020 final played between Italy vs England resulted in a penalty shootout, in which Italy beat England 3-2. The Kiwi cricketer took a jibe at this and tweeted, “Why penalty shootout? Why was the team with the most passes not declared the winner?

Why is it a penalty shootout and not just whoever made the most passes wins? 👀 #joking 😂

Former New Zealand cricketer Scott Styrish also took a similar pinch on the final result of Euro 2020. He tweeted, “The result is beyond my comprehension…. According to me, England had more corners, so he should have been the champion too.

I don’t understand…. England had more corners …. they are the champions! #Stillsalty

The connection of the words of Kiwi cricketers to the past!

In a witty tone, the strings of these words of New Zealand cricketers go to England’s victory in the 2019 ODI World Cup. The final match between England and New Zealand in the 2019 ODI World Cup was a tie. In this case, England was declared the winner on the basis of most fours. This could be a big reason for the Kiwi cricketers to quip after the defeat of England in the final of Euro 2020.