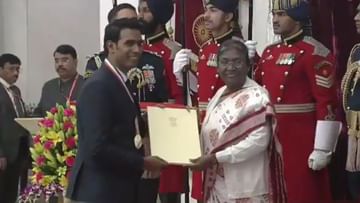 Every year sportspersons who perform exceptionally well in the world of sports are honored with the Sports Awards.

After a delay of three months, this year’s Sports Awards were finally given on Wednesday. The country’s President Draupadi Murmu honored the players who have brought laurels to India in the world of sports. Sports Awards are usually given on 28 August. Sports Day is celebrated on August 28 on the occasion of the birthday of hockey player Major Dhyanchand. Although this year the awards are being delayed due to the Commonwealth Games.

India’s star and experienced table tennis player Sharath Kamal was awarded the Major Dhyanchand Khel Ratna Award this year. He was the only player to receive this award this year. Apart from them, 25 players were selected for the Arjuna Award. Players and coaches were honored in a program organized at Rashtrapati Bhavan. No cricketer is included in this year’s list of winners.

These players were honored