MI captain rained sixes, scored a stormy half-century, yet the team was embarrassed 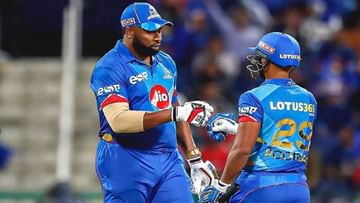 Explosive batsman Kieron Pollard is currently running in stormy form. He scored his second consecutive half-century in the International T20 League. However, in the second consecutive match, his stormy half-century was ruined. Pollard did wonders with the bat, but his bowlers could not show their strength and despite creating a ruckus with the bat, he could not save his team from embarrassment. Pollard’s bat, leading MI Emirates, caught fire against the Desert Vipers. In the 15th match of the league, he scored an unbeaten 67 while raining sixes.

Pollard still could not avoid the defeat of his team by 7 wickets. Batting first, Emirates scored 169 runs for 5 wickets in 20 overs. Apart from Pollard, Nicholas Pooran hit 57 runs. The captain of the Emirates thrashed the bowlers of the desert. He hit one four and 6 sixes in his innings.

In response, the team of Desert achieved the target in 16.3 overs at the loss of 3 wickets. Alex Hales of Desert scored an unbeaten 62 off 44 balls and Sherfan Rutherford scored an unbeaten 56 off 29 balls. Pollard had hit a half-century in the last match as well. He played a stormy inning of 86 runs off 38 balls against Dubai Capitals and Pollard’s team had to face defeat in the last match as well.