Messi threatened after the victory over Mexico, the boxer said – pray that I don’t get it 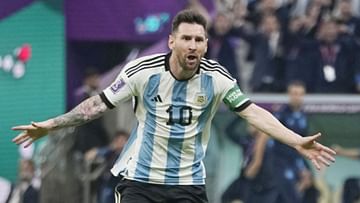 Argentina had a poor start to the FIFA World Cup but bounced back to form by beating Mexico, although their star player Messi is under threat after this victory.

Argentine star player Lionel Messi is counted among the greatest football players of all time in the world. Fan following of this star is enough. But still Messi has been threatened by a person. This player is Boxing World Champion Canelo Alvarez. Messi has received this threat after Argentina’s victory over Mexico in the FIFA World Cup-2022.

Argentina defeated Mexico 2-0 in their second match of the FIFA World Cup-2022. After this, something happened in Argentina’s dressing room, which made Alvarez, the boxer of Mexico, angry and he vented his anger on Messi.

No mames Canelo, no one quits the bot and reaches to pegarle without wanting the player of Mexico🤣🤣🤣 pic.twitter.com/4Ft5ERk0iq

After the victory over Mexico, a video of Argentina’s dressing room went viral in which Messi was keeping his feet on Mexico’s T-shirt. In this viral video, Messi is taking off his shoes and Mexico’s jersey is lying near his feet. Alvarez got angry on this and he took Messi on Twitter. According to the report of The Sun, Alvarez made some tweets regarding this. Wrote in the first tweet, “Did you guys see Messi cleaning the floor with our country’s flag and jersey.”

Vieron a Messi cleaning the floor with our player and flag????

He wrote in some more tweets, “Pray to God that he does not meet me. The way I respect Argentina, he should also respect Mexico. I am not talking about the whole country, I am only talking about what Messi did.


Such is the situation in Argentina