Messi got a challenge from Saudi player in LIVE match, said – you will not win 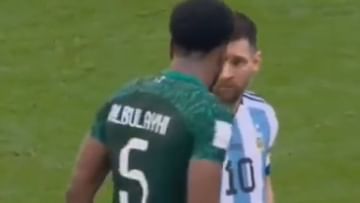 In the FIFA World Cup 2022, Argentina, captained by Lionel Messi, had to suffer vicissitudes. Saudi Arabia beat them 2-1

Lionel Messi is the captain of Argentina

The vicissitudes in the FIFA World Cup 2022 started from Wednesday. Argentina, captained by Lionel Messi, one of the greatest footballers of the century, had to face defeat in their very first match. Saudi Arabia surprisingly defeated Argentina 2-1. During the match, Saudi Arabian defender Ali Al-Boulahi was seen confronting Messi. After the match, he told what he was saying to this star player.

Lionel Messi scored the first goal of the match. He easily scored this goal on the penalty kick. After this, Salem Al Shehri equalized for Saudi Arabia by scoring a goal in the 53rd minute. It was only after this goal that Ali had reached Messi and was seen saying something. He disclosed this in the conference after the match.

Al-Bulayhi clashed with Messi in the match

After the match, Al-Bulayhi was asked what he was saying to Messi. Responding, al-Bulayhi said, ‘I know that he will not win. Will not win under any circumstances. Messi did not understand his point at first but then he started smiling and left from there without giving any answer. This video has become quite viral on social media. What Al-Bulayhi said happened just like that. Argentina did not win the match. He lost this match by 2-1, due to which now his hopes of going to the next round have also suffered a big blow.

This is one of the biggest upsets of the World Cup. There have been some big upsets in this football epic before, such as Senegal’s 1–0 victory over then-current champions France in 2002 and the United States defeating England by the same margin in 1950. Argentina’s defeat also brought back memories of the 1-0 defeat by the Diago Maradona-led side to Cameroon in the 1990 World Cup. The Argentine team has won the World Cup title twice so far. The fans are now hoping for Messi to win the team World Cup title.