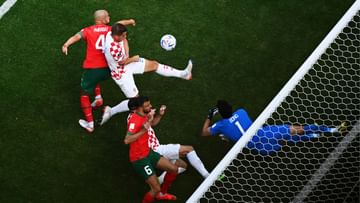 FIFA World Cup 2022 Morocco vs Croatia Report: Only 4 shots were fired on goal from both the teams, but none of the shots could penetrate the goalkeepers.

Every attempt of Croatia was thwarted by Moroccan defenders and goalkeeper.

FIFA World Cup 2022: The ongoing FIFA World Cup 2022 in Qatar has started with a rain of goals, but still thousands of spectators yearned for a goal in some matches. In one such match of Group F, Morocco surprised everyone by holding Croatia to a draw. The African team made more of its own attacks, thwarting the Croatian attacks, but both teams could not score any goal in 90 minutes of play. In this way, Croatia, the runner-up of the last World Cup, had to be satisfied with only 1 point at the beginning of the tournament.

Group F matches started with this match played at Al Bayt Stadium in Al Khor on Wednesday 23rd November. However, in this first match of the day, not many goals were expected from both the teams. Nevertheless, it was shocking not to score a single goal while players like Luka Modric, Ivan Perisic (both Croatia), Hakim Ziyech, Sofiane Boufal, Achraf Hakimi (Morocco) were in the field.

No team could show complete dominance in this match and on the one hand there was strength on the defense front, while on the other hand the lack of finishing was also visible in this whole match. Croatia controlled the match to a great extent and scored 65 percent. Kept ball possession. However, the team could not convert this possession into any big opportunity. Croatia scored a total of 5 shots, of which only 2 were on target (goal).

Morocco was not a stronger team than Croatia, but still this team scored 8 shots in which 2 were on target.