Kolkata Knight Riders: The combination of KKR is a danger bell for the rest of the teams, it will be difficult to stop

Kolkata Knight Riders won the IPL titles under the captaincy of Gautam Gambhir in 2012 and 2014, but after that, they have been bereft of the title.

The Kolkata Knight Riders have not had much success since the Indian Premier League started. The team had longed for the title from 2008 to 2011. In the early seasons, it was a situation that she used to live on the lower rungs in the numerical table. The fate of the team changed in 2012 when Gautam Gambhir became the captain. The team won its first title under Gambhir’s captaincy. The same Gambhir made Kolkata the winner again in 2014. But since then, till the last season i.e. 2020, Kolkata could not win the third Bir title. His title drought continues unabated.

The team made Dinesh Karthik the captain in 2018 but he could not do anything special. In 2019, Karthik captained but did not get success. In 2020, Karthik was removed from the captaincy in the middle season and was made the captain of England, Ayn Morgan. Morgan will captain the team for the entire season in 2021. Morgan is the captain who gave England the first ODI World Cup. It remains to be seen whether the team can win the third IPL title under Morgan’s captaincy.

If you look at the team of Kolkata, then they have all the things they need to be a strong team. From strong batting to strong bowling and stormy finishers too. It is a matter of showing form just by keeping pace with everyone. Batsmen like young batsman Shubman Gill, Nitish Rana, Rahul Tripathi, Oyen Morgan, Dinesh Karthik, Tim Seifert are the team who can score in any case. The team also does not have a shortage of all-rounders. All-rounders such as Ben Cutting, Shakib Al Hasan, Venkatesh Iyer, Sunil Narine, who have the ability to reverse the match with bat and ball, are also with the team. At the same time, a team like Andre Rasail also has a team that can derail the front team by hitting big shots in minutes. Together, all of them can make the biggest score and achieve any goal. 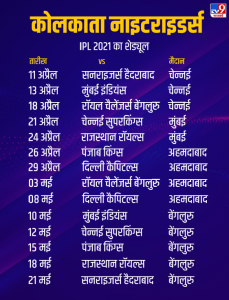 Experience with young spirit in bowling

Bowling is also very strong of the team. Pat Cummins has a name like Kolkata which has experience all over the world. Along with Cummins, the team also has the passion of India’s young bowlers. Shivam Mavi, Kamlesh Nagerkoti, the famous Krishna has told in the past seasons that he has the power to stop the biggest batting attack. In the spin department, there is a charismatic spinner like Naren, as well as Varun Chakraborty, who influenced the past season. At the same time Kuldeep Yadav’s spin can also be useful for the team. This season, the team will also have the experience of Harbhajan Singh.