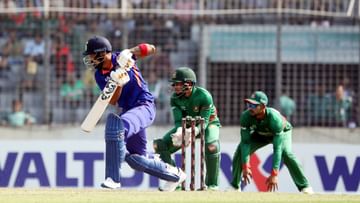 KL Rahul opens the batting but in ODIs, Team India tries him in the middle order and he has played a brilliant inning while batting at number-5.

Rahul did not start the innings in this match. Shikhar Dhawan came to start the innings with Rohit Sharma. Rahul landed at number-5 and here he played a brilliant inning while handling the team. On the basis of his innings, Team India could reach 186 runs in the first match.

When Rahul came out to bat, Team India was in trouble as it had lost three of its important batsmen. Shikhar Dhawan (7), Rohit Sharma (27) and Virat Kohli (9) were dismissed after scoring runs. The team’s score was 49 runs at the loss of three wickets. From here Rahul handled the innings. Shreyas Iyer supported him for a while and took the team’s score to 92. Iyer got out after scoring 24 runs. Then Sundar took the innings forward with Rahul.

Rahul shared a half-century partnership with Sundar. Sundar and Rahul added 60 runs. After this Shakib took a flurry of wickets but Rahul remained strong.

The Indian innings could have ended at any time. In such a situation, Rahul thought of putting his foot on the accelerator and started scoring fast. In this effort, he was dismissed on the fifth ball of the 40th over. Ibadat Hussain bowled a short ball on which Rahul tried to pull but the ball went into the hands of the fielder. Anamul Haq caught his catch. Rahul scored 73 runs in 70 balls. In his innings, this batsman hit five fours and four sixes.